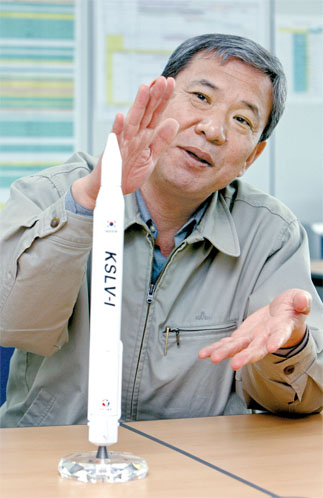 Min Kyung-ju, 56, head of the Naro Space Center, hopes South Korea will be able to develop a rocket using purely its own technology by 2017. [JoongAng Ilbo]

Min Kyung-ju, 56, the head of the Naro Space Center since 2001, talked to the JoongAng Sunday about the current state of the country’s space technology and some of the obstacles.

Q. What is the significance of the KSLV-1 launch?

A. This will be the first time we’ve launched a satellite from our own soil. We are getting help from Russia but by 2017 we think we will be able to develop a rocket purely with our own technology.

Technology regarding the first-stage rocket, which is the key part of any rocket launch, has not been transferred.

t is significant that we are able to use 100 percent of our own technology on the launch pad. It has also helped a great deal that we have conducted joint tests with Russian scientists. That has helped us pick up some technology. Recently, a Russian official from a launch pad maker visited us and when he saw how much progress we had made, he made a request that we should help build the launch pad at the Baikonur space center in Kazakhstan.


You must have faced some difficulties?

There are 20 Russian security officials. Whenever there is a meeting they attend. The complex where the first-stage rocket is being assembled is like a Russian Embassy. You can’t get in without their permission because they are worried about the possibility of a leak.


On April 5, North Korea launched its own satellite. What are your thoughts?

As a scientist who competes in the field of space technology several thoughts crossed my mind. As a means to maintain the regime they put all their efforts into the rocket launch. If our missile agreement with the United States is resolved and more money and time is put into this, we can develop space technology much faster.


What is the impact of the current missile agreement between Seoul and Washington?

In the agreement, there are articles that limit the development of space technology. There are no limitations on rockets using only liquid fuel. Nevertheless, the total weight of a rocket using solid fuel cannot exceed 1 million pounds. This translates into a very small amount of power that is only strong enough to put a satellite into orbit after the first stage of the rocket has been burned. In order to launch a real rocket we need a powerful solid fuel-based rocket.


Why is the United States blocking the development of solid fuel-based rockets?

Since solid fuel can be stored inside a rocket, such missile types have been frequently used in military applications. In the case of liquid fuel rockets, if stored for too long, the fuel can erode the rocket structure itself. The technology related to solid fuel rockets is a direct road to Intercontinental Ballistic Missile technology and this is the part that the United States is concerned about.