Caught up in a world of suffering and despair

Caught up in a world of suffering and despair 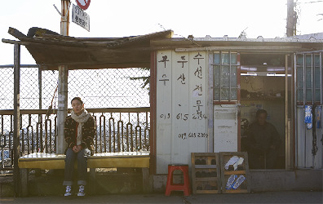 Jin-seo (Yun Jin-seo) waits for her brother in “Iri.” [CineSeoul]


On Nov. 11, 1977, a massive explosion ripped through the railyard at Iri Station in North Jeolla, a major junction for trains heading up and down the west coast of the peninsula.

It was an accident. Dynamite being carried on a train from Incheon south to Gwangju somehow caught on fire. Fifty-seven people were killed.

Chinese director Zhang Lu’s “Iri” is set during the 30th anniversary of the catastrophe, and in Jin-seo’s (Yun Jin-seo) 30th year.

She and her brother are live-in caretakers at an old folks’ home. He drives a cab during the day; she works at a Chinese hagwon where she eavesdrops on classes and picks up words. The male teacher regularly rapes her, and she’s gained a reputation as the “town wacko.”

Her brother Tae-woong (Eom Tae-woong) occasionally attempts to protect Jin-seo, but ultimately she’s on a path of perpetual despair.

And there is no shortage of desperate and lonely people waiting to take advantage of her: the Vietnam veterans’ society, a local illegal immigrant who misses his son back home, her boss who refuses to pay her.

Zhang is very skilled at creating an atmosphere, with static camera work recalling surveillence, contributing to a feeling of stagnant existence for its own sake.

But there’s a line this kind of movie must be careful not to cross, between elegiac lament and cartoonish suffering. Iri wanders across it halfway through and never finds its way back.

Soon bad things seem to start happening around Jin-seo for no reason - a little girl living at the local convenience store dies of an illness. An old man Jin-seo briefly tries to seduce hangs himself. Tae-woong rapes the coffee girl who sent Jin-seo to the veterans’ club in revenge. Then he tries to drown his sister to put her out of her misery.

Aesthetically Iri accomplishes its goals. The characters seem real, the performances are
matter-of-fact and often devastating. But others have been there before it, and more compellingly.

The march of suffering Zhang visits upon them stops being disturbing or even numbing and starts seeming ludicrous. Iri does communicate its message that life is full of pointless suffering. It’s just that those of us who live in the real world may find it tiresome.