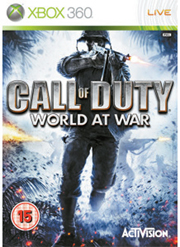 Picture this, you’re a U.S. Marine battling Japanese Imperial Army soldiers at the Pacific front or you’re a member of the Red Army in Europe advancing through the Nazi lines towards Berlin. Sound familiar?

The World War II theme in the first-person shooting game genre has been done to death. While pondering whether to pick up the “Call of Duty: World at War” title, this reviewer wondered why the developers at Activision decided to go back to that familiar setting, ignoring the popularity of the “Call of Duty 4” title, which had an urban warfare theme.

While I vowed not to touch another WWII first-person shooting game after trying out “Call of Duty 3,” I decided to give the latest title a go. As it turns out I was pleasantly surprised.

The use of the successful Call of Duty 4 engine, new enemies, weapons, modes and challenges make this title a load of fun. With its video footage and intro, the game plays out like a realistic WWII documentary on the History Channel.

The game basically switches back and forth between two modes. As part of the new theaters of operation, the player controls Private Miller of the U.S. Marine Corps 1st Division’s campaign from Makin Island to Shuri Castle on Okinawa Island. In the other mode, Private Petrenko of the Red Army’s 62nd advances through the Eastern Front from Stalingrad to Berlin.

This fresh angle on the WWII theme is part of the game’s charm but the variety of weapons and the change of pace they offer adds to the overall positive gaming experience. The weapons include the usual pistols, rifles and machine guns of the era but the use of the sniper rifle in Stalingrad is eerily similar to the film “Enemy at the Gate.” With tanks to blow enemies into bits, as well as the ability to shoot down kamikaze planes as a weapons operator on the PBY Catalina, the game offers plenty of variety.

While trying to advance through certain stages can be a bit time-consuming, the attention to detail in the game’s design is evident. Take for instance the use of flame throwers, which allow gamers to burn down trees and grass to reveal enemies in hiding.

I’m no expert but the visuals and sound effects are also impressive. The addition of Kiefer Sutherland as Sergeant Roebuck of the USMC and Gary Oldman as Sergeant Reznov is another nice touch.

For those who enjoy the multi-player option, the new squad-based interaction and combined infantry and vehicle missions offer something completely new to fans of the series.

The verdict: This game is surprisingly addictive. The enhancements from pervious editions and intense missions will have you wasting hours of your weekend in front of the tube in no time. It’s definitely worth the purchase.

“Call of Duty: World at War”