Unexpected space in a topsy-turvy shape

Unexpected space in a topsy-turvy shape 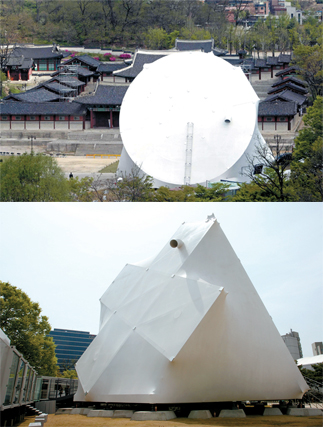 The Prada Transformer sits in front of Gyeonghui Palace in central Seoul.Provided by Edelman Korea,

The steel structure looks like it came from outer space and landed here in front of Gyeonghui Palace in central Seoul. As unlikely as it sounds, it will house four different cultural exhibitions over the next five months.

The Prada Transformer, as it is named, has finally arrived in Seoul. It is a huge tetrahedron - a geometric shape with four triangular sides - and has a hexagon, cross, rectangle and circle on each side.

However, the edifice, which can accommodate 200 spectators, will shift position several times between expositions, though not while people are inside. In the topsy-turvy Transformer, the ceiling of one exhibition becomes the floor of the next, and the floor of the current event can become a wall.

“It is a dynamic organism, as opposed to a static object that arbitrarily fits a program,” said Dutch architect and educator Rem Koolhaas, 64.

He was commissioned by the Italian fashion house Prada SpA to design the edifice together with the Office for Metropolitan Architecture, the Rotterdam-based architectural firm he founded.

Tomaso Gali, director of communications and external relations for the Prada Group, said their goal was to create a place that is unique and special.

“We’ve worked with many architects, artists and filmmakers over the years, but we’ve kept their work separate from each other. This time, though, we wanted to put them all together for the first time,” he said.

Gali said the project will take place only in Korea and will not be repeated elsewhere in the world, even though many people have said they want to replicate it in other locations.

The Prada Transformer is meant to symbolize change, which typifies the fashion industry. Then, why does it rotate?

Koolhaas, an acclaimed architect and a skeptic, points out the discrepancy between the “acceleration of culture and the continuing slowness of architecture.”

That is why the Prada Transformer defies the basic principles of gravity, stasis, orientation and location by changing shape. 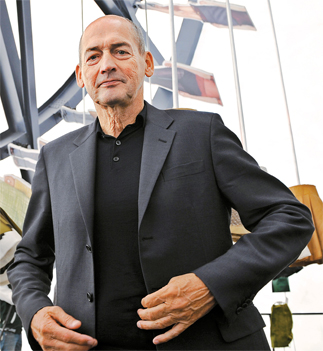 Prada Transformer is the third project carried out by Koolhaas in the country. He designed the Seoul National University Museum of Art and the Leeum Samsung Museum of Art, which he designed in collaboration with fellow architects Mario Bota and Jean Nouvel.

Koolhaas has been called a deconstructivist because he challenges the basic assumptions of modern construction design in favor of fragmentation and non-linear visuals.

He’s now trying to create something unprecedented, according to Chun Eui-young, a professor of architecture at Kyonggi University.

“The Prada Transformer denies that the sum of the parts is equal to the whole,” Chun said. “What [Koolhaas] pursues is something that has no consistent style and is not representative of anything.

“Through the transformation, he tries to show that the city that contains it can also change,” Chun added.

Koolhaas’ experimental spirit won him the Pritzker Architecture Prize, one of the profession’s highest honors, in 2000, and Time magazine included him in the top 100 of the world’s most influential people in 2008.

The structure creates an deliberate contrast with the surroundings. Koolhaas was apparently very keen to locate the structure near Gyeonghui Palace, which dates back to the Joseon Dynasty.

Initially, Seoul suggested Olympic Park in southeastern Seoul or Seoul Forest in Ttukseom on the Han River as a possible site for the project. But Koolhaas preferred a more central location.

“We’re looking for a place totally contextual to the project and close to the city center,” said Alexander Reichert, OMA director in New York. “It is a historic place, has beautiful architecture and is a natural breeding ground for the arts.”

One of five palaces from the Joseon Dynasty (1392-1910), Gyeonghui was almost forgotten after it was demolished by the Japanese in the early part of the 20th century. Only a few historic buildings now remain in the site. Most buildings that now exist were rebuilt after the 1990s.

Much of the space where the palace used to stand is now occupied by the Seoul Museum of History.

The location of the project creates a contrast between the old and the new and between the slow and the fast, which is the motivation for the project. “The proximity with the palace exemplifies changes in the architecture and the fashion industry,” Reichert said.

“The Prada Transformer is characterized by depaysement [French for disorientation], which means placing an object in an unexpected location,” Chun said.

“It offers an opportunity to look at a forgotten palace and contemplate the new possibility of a cultural asset, which is very positive,” Chun added.

Then, why did Prada build the structure in Seoul?

“We chose Seoul after considering the importance of Korea, which is fast developing culturally and as a market at the same time,” said Patrizio Bertelli, Prada chief executive officer and husband of the fashion house’s creative director, Miuccia Prada.

Both Koolhaas and Bertelli were present at the opening ceremony held yesterday.

The Transformer will open to the public tomorrow with an exhibition called “Waist Down: Skirts by Miuccia Prada.”

It will continue till May 24. Then, the edifice will be flipped around for a film festival titled “Flesh, Mind and Soul,” put together by Gonzalez Inarritu, the director of the 2006 movie “Babel.”

The film festival will start on June 26 and go on until July 12. After that, there will be a contemporary exhibition, “Turn into Me,” by Swedish artist Natalie Djurberg.


Admission to the Prada Transformer is free and parking is available at the Seoul Museum of History.