Light up a lantern to lighten your load

Light up a lantern to lighten your load 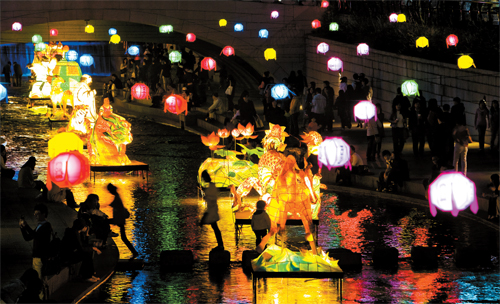 The streets of central Seoul will turn into a sea of flickering lanterns today and tomorrow for the Lotus Lantern Festival as part of the buildup to Buddha’s Birthday, a national holiday which falls on May 2 this year.

As part of the festivities, brightly decorated lanterns will be hung at Buddhist temples and along the streets in cities and towns across the nation. Downtown, a large pagoda-shaped lantern is currently brightening Seoul Plaza in front of City Hall and nearby, the Cheonggye Stream is awash with color.

For believers, the illumination of the lanterns symbolizes the enlightenment of the Buddha. The light means wisdom and mercy that shakes to their senses those who are lost in a world of greed. 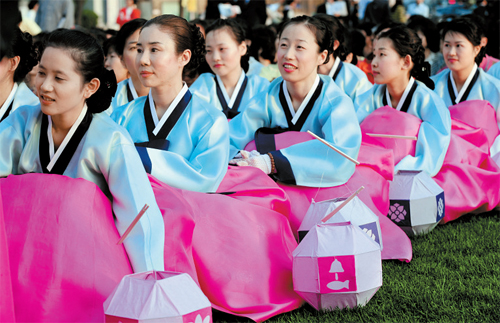 However, the festival is not just for Buddhists. It doesn’t matter if you are a radical atheist or a Seventh-day Adventist, everyone is welcome.

Over 100,000 lotus lanterns are lit during the festival every year along Jongno Street, which runs through the center of the capital, and more than 300,000 spectators are expected to take to the streets.

Bongeun Temple in southern Seoul kicked off the festival yesterday with an exhibition of traditional lanterns, which continues through May 5. The lanterns are elaborately made with hanji, or traditional Korean mulberry paper. 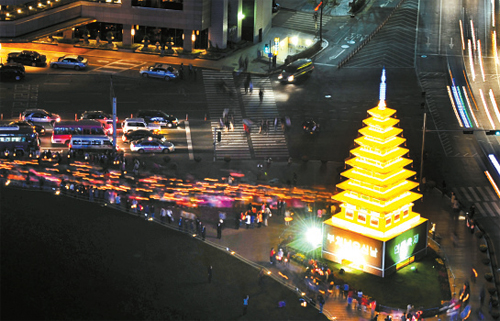 There will be lantern performances in Jongno’s Insa-dong and the street in front of the Jogye Temple, the home of the Jogye Order of Buddhism - Korea’s largest - to mark the eve of the festival.

“Buddhists should light up lanterns of wisdom and mercy to brighten the world,” said Venerable Unsan, head monk of the Taego Order, the second-largest in Korea. “We need to live like the lotus plant, which doesn’t lose its purity even though it grows in the mud.”

The lotus lantern parade on Sunday, the highlight of the festival, will start after a Buddhist service at 4 p.m. at Dongguk University. The parade will pass through Jangchung Gymnasium and Dongdaemun Stadium and arrive at Jongno at 7 p.m. before it comes to an end at Jonggak intersection at 9:30 p.m.

Monks and performers from 10 Buddhist nations, including Bangladesh, Cambodia, India, Mongolia, Nepal, Sri Lanka, Taiwan and Thailand, will show off their own Buddhist culture, traditional costumes and music at a street fair in front of Jogye Temple on Sunday.

Visitors can make their own lotus lanterns and eat temple food between noon and 7 p.m. on Sunday.

To participate in the lantern-making event, call (02) 722-2206 or e-mail ipogyo@buddhism.or.kr. For more information on the festival, visit www.llf.or.kr/eng.

On May 2, Buddha’s Birthday, temples across the country will carry out a special service at 10 a.m. and a lotus ceremony at 6 p.m.