Harry Potter and the Trophy Wife

Harry Potter and the Trophy Wife 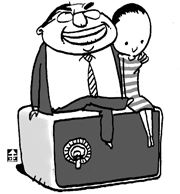 A recent incident shocked and saddened Harry Potter fans. It had to do with Emma Watson, the 19-year-old actress who plays Hermione in the “Harry Potter” series.

A Russian daily newspaper reported on April 22 that Watson is dating Roman Abramovich, the billionaire oil magnate and owner of Chelsea Football Club.

It’s not easy for fans to link the cute little girl they see on screen with Abramovich, who is considered a symbol of the Russian nouveau riche.

Fortunately, Watson revealed the identity of her real boyfriend ? a handsome 27 year old ? as soon as the story broke.

But there’s a rumor that the boyfriend was created to appease fans who might not be able to digest the fact that the Hermione’s romantic partner was 23 years her senior, a headline that might put people off seeing her next movie.

But for the moment, it doesn’t look like Watson is going to become someone’s trophy wife before she turns 20.

A trophy wife can be defined as “a young, pretty wife of a man who is middle-aged or older and has established wealth and reputation.” Apparently the saying originated in Roman times, so it has a very long history.

Some say the word “trophy” means “return” in its Greek etymology.

In Roman times, men often went out to war to elevate their social status and property, and when they returned home, they married beautiful young women to gain a sense of compensation for risking their lives and living their younger years on the battlefield.

Since the 20th century, celebrities were naturally loved as the new “trophies.” One major example is when former Playboy model Anna Nicole Smith married oil magnate Howard Marshall in 1994 when she was 26 and he was 89.

During the U.S. presidential election in 2008, Republican candidate Fred Thompson was a subject of great discussion because his wife is 24 years his junior.

It is hard to find such an example in Korea, but social leaders who marry trophy wives are not rare in other Asian countries such as China and Japan.

This is probably because of the social atmosphere that demands moral dignity together with material success.

However, it is a different story when it comes to wives from Southeast Asia. According to a report on current international marriages in the agricultural region of Yeongnam at the end of 2007, the average age difference between brides and grooms was 12 years.

It was 18 years when the bride was from Vietnam or Cambodia.

With the number of young wives from other countries gradually increasing, I do not think Korea is in a situation to look strangely upon the trophy wives found in other countries.