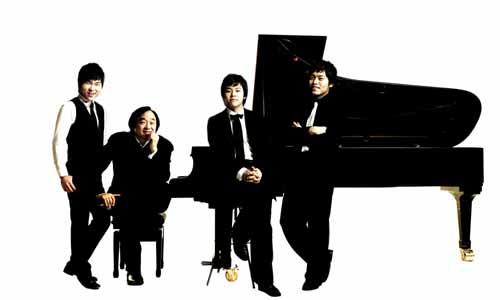 
With 88 keys, a piano is one of few musical instruments that can cover a wide range of sounds on its own. Imagine what happens when four pianos play together.

For the last couple of years, this idea has captured the imagination of pianist Paik Kun-woo: performing with other pianists, and not just other pianists but pianists who are young enough to be his children.

And come this May, his vision will materialize. Paik and three rising Korean pianists will perform together in four cities across the country from May 10 to 15.

They are Kim Tae-hyung, Kim Jun-hee and Kim Sun-wook. Having found a break in their work schedules, the four will get together and embark on an intensive practice in the beginning of next week.

“When you play alone, there is a certain musical world that comes into view. When you play with others, I think another world unfolds, one with a good harmony,” said Paik, 63, at a recent press conference.

However, it wasn’t easy planning this concert, Paik admitted. For starters, there aren’t many pieces for four pianos as the idea is such a rarity. But through persistence, Paik was able to find some suitable works.

The three pianists, aged 19 to 24, are obviously excited about the prospect of playing with Paik.

“We’ve known each other for quite a while, but we haven’t had a chance to play together,” Kim Jun-hee said.

“I’m particularly happy that we’ll be performing in Korea, and I’m curious to know what kinds of sounds we are going to create,” he added.

The three musicians studied at Korea National University of Arts and made names for themselves in the international arena winning numerous competitions and performing in many countries.

The main reason for holding this kind of concert, Paik says, is to encourage more aspiring musicians in Korea to reach for their dreams.

“I’m used to a great deal of emotional help from older Korean musicians and I now know that camaraderie - helping one another and learning from one another - is what keeps us going,” Paik said. “Korea’s piano history is relatively short compared to some other countries, and I think the time is ripe for a concert like this.”