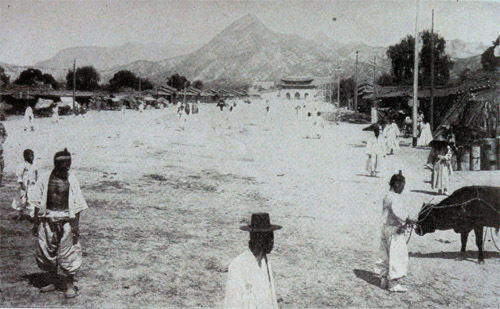 Sejongno was the widest and grandest road during the Joseon Dynasty (1392-1910). Provided by Myongji University-LG Yeonam Library

The National Mall in Washington, D.C. The Champs-Elysees in Paris. Tiananmen Square in Beijing.

Most major cities have a landmark street or square that runs like a main artery through the downtown area or stands at the heart of the metropolis.

It’s an area indelibly linked to the soul of the country, one that tourists are inexorably drawn to take photos of and say, “Been there.”

Admittedly, Seoul doesn’t have a boulevard that rivals the likes of Fifth Avenue for international fame, but it does have Gwanghwamun. 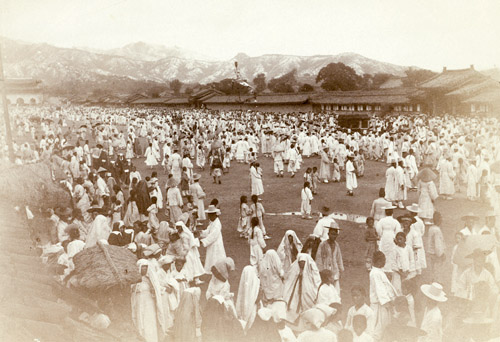 This photograph is presumed to be the state funeral of Queen Min (Empress Myeongseong), which took place in Sejongno in 1897.

With the presidential residence of Blue House in the back, the road intersects with Jongno, the capital’s commercial cluster and Seoul Plaza, a square in front of City Hall, making it the perfect hub for political, social and cultural events.

Since the early years of the Joseon Dynasty (1392-1910), this thoroughfare was the main road leading to Gyeongbok Palace, which was originally built by King Taejo in 1394, the dynasty’s founder.

“[Yukjogeori] is the road with the biggest symbolic value in Korean history,” said Kim Sung-woo, a professor of architecture of Yonsei University. “It is notable how it also functioned as a national square. There weren’t many squares or open spaces for the public in Korea at that time.”

The sheer width of the road is outstanding for the Joseon period as well. According to a book of laws drawn up in 1394 by prominent scholar Jeong Do-jeon, the width of large roads was stipulated to be no more than 17.5 meters, medium-sized roads 5 meters and small roads 3.4 meters.

The width of Yukjogeori at the time was between 51 meters and 53 meters, three times larger than other large roads. 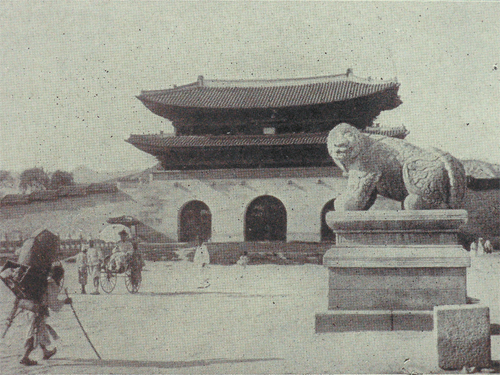 Two statues of Haetae, a legendary fire-eating animal, were placed in front of Gwanghwamun as the royal family worried about a prophesy that Mount Gwanak would bring fire to the city.

We can get a sense of the scale of the road from the main photograph on this page taken from “Burton Holmes Travelogues,” published in 1901 by Burton Holmes (1870-1958), a pioneering filmmaker and travel photographer.

According to Ahn Chang-mo, also a professor of architecture at Kyonggi University, one of the interesting elements from the photograph is the way the palace and the government offices are positioned. While the palace faces south, the preferred direction for many traditional Korean buildings, the government offices that oversaw civil affairs were built on the east side of the road facing west, while offices for military affairs were built on the west side facing east.

This design reflected the positions the government officials adopted in the presence of the king at the royal court, Ahn says, and thus a mirror to the hierarchical order of the day.

Another intriguing factor in this photo is the presence of seemingly low-class people in what was a regal and solemn road leading to the royal palace and government complex.

“A man showing his chest, a merchant tending his cow, these unlikely people along this regal road indicate that this photo was taken in the latter years of the dynasty when the royal palace and the government complex began to lose authority to Korea’s colonial rulers from Japan,” Ahn added.

According to the book “Secrets of Sejongno” by former Seoul city official Yu Gil-sang, Yukjogeori reflects a state of mind. The road was laid on an axis connecting Mount Bugak in the north and Mount Gwanak in the south. This axis is thought be important in terms of the feng shui of the landscape, where the peninsula’s “spirit” is believed to flow. 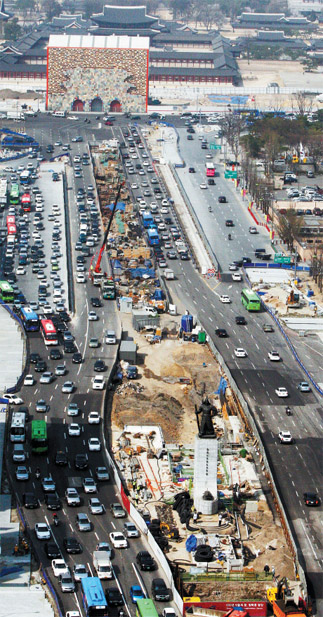 The book argues that during Japan’s colonization of Korea (1910-1945), Japan altered the axis where the road was laid when they removed Gwanghwamun and built their General Government Building and a shrine on Mount Namsan. The road was moved to the new axis connecting the building and the shrine.

Come independence, efforts were made to restore the area to its original shape, tearing down Japan’s General Government Building and setting up Gwanghwamun.

And a new name was given, Sejongno, in honor of respected Joseon monarch, King Sejong (1397-1450), and just like the old days, important buildings like government ministries, foreign embassies and media outlets were built along the sides.

With Gwanghwamun on the site where Japan’s General Government Building once stood, but not on its original site, and the road still on an altered axis, a major reconstruction project kicked off in April 2008 that plans to restore Gwanghwamun to its original location and build a square in Sejongno.

The idea for a reconstruction had surfaced several times but was turned down by former administrations. The ongoing reconstruction led to a surprise find. During construction last September, archeologists unearthed soil from the original Yukjogeori about five meters below the asphalt, the first such discovery of the 600-year-old road. 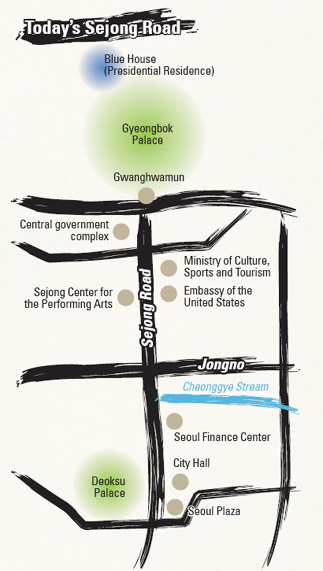 “Three meters down, a dragon-patterned piece of white porcelain was staring right at me. My heart was pounding with excitement,” said Park Jun-beom of the Hangang Institute of Cultural Heritage who led the excavation. “What’s unique about Yukjogeori is that it used sand that had a strong cohesive quality, instead of using rubble, as was often the case before the Joseon era.”

Over time, rain and wind made the sand harder and harder, “making the road firm and grander, something that pleased the king and impressed foreigners to a great extent,” Park said.

The layer of soil will be on display at the new square when the Gwanghwamun project is completed in July.


But the blueprint for the square, which came out in February, is not without controversy. Some critics say the once-regal road may lose its identity, as it is crammed with too many ideas from different parties. It contains more than 15 public facilities including two statues of historical heroes, a sunken garden, waterways, ponds and gardens, among others.

“Yukjogeori was just a road and, in itself, meaningful. It seems the authorities might have been pressured to do all they can,” said Yonsei University’s Kim.

Reconstruction will be completed in July and for the first time in decades, Koreans will be able to stand on the road facing Gwanghwamun and walk toward the royal palace.