The torturous tools of coercion

The torturous tools of coercion 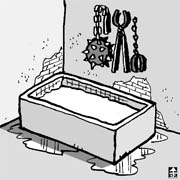 The iron maiden is a monstrous torture device used in the Middle Ages to interrogate prisoners. Inside the iron cabinet shaped like a maiden were numerous spikes waiting to “embrace” or “kiss” the victims to their bloody death as the lid is slowly closed. As soon as victims were pushed into the cabinet they would ramble and blurt out anything they knew or didn’t know in extreme panic.

The most notorious iron maiden resided in the castle of Nuremberg. In the basement of the castle was the workroom of torture master Franz Schmidt, who left a famous diary that contained detailed records of over 700 people he executed in the 16th century.

The torture instrument was first recorded by the Greek historian Polybius, who wrote of Nabis, a brutal ruler of Sparta. According to his tale, Nabis built a mannequin studded with spikes in the likeness of his wife and coaxed guests who refused his request for money to embrace his “wife,” which was in fact the mutilating machine.

Mankind has invented an array of torturous tools primarily because of the effectiveness and efficiency of their “persuasive” power.

Waterboarding, claimed recently by the U.S. Central Intelligence Agency to have been employed to coerce prisoners of war during interrogation with approval from former President George W. Bush, is also a part of the history of torture.

A recently disclosed memo described CIA agents using waterboarding, which involves strapping a prisoner down and pouring water over a cloth covering his nose and mouth, to interrogate so-called “high value” terrorism suspects. Hard-line military officials advocated that the technique has helped to coerce confessions from Al-Qaeda’s most dangerous and determined prisoners.

If gaining information and confessions was the ultimate goal, American interrogators should have taken lessons from the Chinese for their innovative interrogation methods used in the Korean War.

Unlike their brutal North Korean partners, the Chinese made American prisoners criticize their country in writing with the aim of squeezing out valuable military information. They repeated the method until Americans were brainwashed to turn bellicose against their country in their writings.

Whoever the prisoners were and whatever the purpose was, no excuse can pardon the former Bush administration for committing such human rights atrocities.

Ramsay McDonald, Britain’s first Labor Party prime minister, had lamented decades ago the crimes and cruelties governments have committed for the sake of their nation.

It’s unfortunate that we are still battling such tragedies.