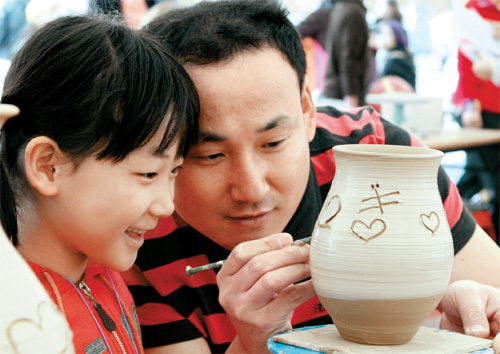 Visitors paint their own pottery at the World Ceramic Biennale in Icheon. [YONHAP]

Ceramics have long been the ugly step-children of the art exhibition world.

While there are plenty of large exhibitions in Seoul focused on paintings and other types of art, sizeable events dedicated to ceramics are a rarity.

But ceramics fans are finally feeling the love.

The 6th World Ceramic Biennale, which kicked off April 25 and runs until June 21 in three areas around Gyeonggi Province, has grown into a major event. And this year it’s bigger than ever, boasting more participants, competitions and activities, organizers say.

The cities participating in the event - Icheon, Yeoju and Gwangju in Gyeonggi - have also developed a reputation in the ceramics world.

Collectively, the cities are now known in some circles as the “ceramics belt,” boasting 660 kilns - or 36 percent of the nation’s total. The cities have each individually held smaller ceramics festivals in the past. But, this year, they’re teaming up and hosting visitors jointly as part of the Ceramics Biennale.

The reason for such a high concentration of kilns and craftsmen in the Gyeonggi region can be traced back to the early Joseon period (1392-1910), when ceramics were mainly used by the royal family and the upper class.

In those days, when the roads were rugged and the main mode of transportation consisted of carriages drawn by cows, the main concern for ceramics manufacturers was how to safely transport their extremely fragile finished products. One ill-timed bump or jostle, and the whole load could shatter.

This is precisely the reason why Yeoju, Icheon and Gwangju were targeted as ideal locales for producing ceramics. The three cities were located near the Namhan River, providing a direct route via boat to the Han River near the capital city. The plentiful water and mud in the area also provided craftsmen with an ample supply of the natural resources needed to produce ceramics.

Initially, Yeoju was the hub of ceramics made for the lower class and commoners, while Gwangju primarily churned out ceramics catering to the needs of the Royal family and the upper class. In time, most of the skilled producers moved to the Icheon area, turning it into a hotbed of artistic ceramics.

The importance of having a water route for the transportation of ceramics has diminished over time. But the remnants of that history are still evident in the annual ceramic festivals and the World Ceramic Biennale.

One of the highlights of this year’s event is the 5th International Competition, which features ceramic works by 1,726 participants from 70 countries. The competition gives visitors a chance to take in some of the best contemporary ceramic designs.

Additionally, the Ceramic Space and Life exhibition lets visitors explore the relationship between, what else, ceramics and space. There also will be plenty of traditional Korean ceramics on display.

A trip down to the biennale offers visitors the chance to revel in the world of ceramics, past and present. But even the casual visitor will find something of interest, and it’s also a great way to get a glimpse of the region’s cultural history.