Frosty rocks in the middle of spring on Jeju Island

Frosty rocks in the middle of spring on Jeju Island 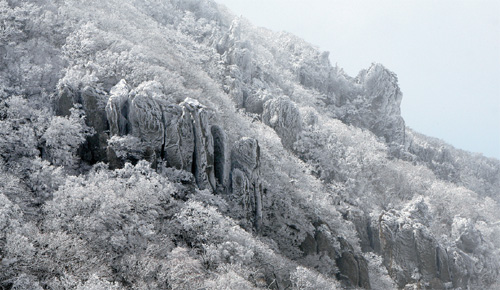 The extreme weather conditions on Jeju Island off the southern coast of the peninsula are legendary. Sometimes it’s as if four seasons are compressed into a single day. Such seesawing conditions are a pain for tourists, but there is an upside - breathtaking sights.

Last Monday morning, for instance, Mount Halla took on a wintery look when the outside temperature suddenly dropped to minus 1.3 degrees Celsius (29.6 F) at 1,700 meters (5,577 feet) above sea level. The ensuing frost covered the branches of the trees and the pink azaleas and yellow hued papaver coreanum flowers that had bloomed in time for spring.

“The biggest attraction on Mount Halla during this time of the year are the various hues that color the mountain when the flowers bloom,” said Hyun Sang-hoon of Jeju’s Tourism Promotion Department.

At 1,950 meters, Mount Halla is Korea’s highest mountain, one of the top three peaks in the country, the others being Mount Jiri in the south of the country and Mount Seorak in Gangwon.

Designated Natural Monument No. 182, Mount Halla is, literally, the biggest draw for visitors. The peak, though often covered in clouds, is visible from all over the island. Those willing to brave the chilly climate conditions and steep terrain can take one of four trails: Gwaneum Temple, Eorimok, Seongpanak and Youngsil.