Lopping off a eunuch’s power

Lopping off a eunuch’s power 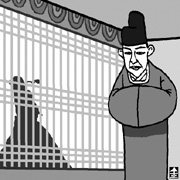 Zhu Yuanzhang, the founder of the Ming Dynasty who toppled the Mongolian Yuan Dynasty, was always worried that eunuchs would have too much power and political influence. He ordered signs to be hung in major public offices that read, “Eunuchs are prohibited from engaging in state affairs and those who violate this rule shall be executed.” He believed that one of the reasons why prosperous past dynasties such as the Tang ultimately collapsed was that eunuchs interfered in politics, causing confusion in state affairs. Zhu even prohibited them from learning how to read and write.

Despite the emperor’s concerns and efforts, meddling in state affairs by eunuchs led to the collapse of the Ming Dynasty. Toward the dynasty’s latter days, wicked eunuchs like Wei Zhongxian and Wang Zhen were notorious.

A eunuch’s duties were to serve the emperor and handle administrative affairs. A record from the late Ming period noted that there were 9,000 court ladies and 100,000 eunuchs. Another record adds that in 1911 at the tail end of the Xinhai Revolution that ended imperial rule and ushered in a republic, 3,000 eunuchs were still working in the royal court of the Qing Dynasty.

The close circle formed by eunuchs around the emperor was called danei in Chinese, or daenae in Korean. Originally it referred to the storage room in a palace but later it was transformed to mean the royal inner court - people or officials close to the top leader. The word was also used to refer to the royal court during the Joseon Dynasty.

It is natural for eunuchs in the daenae to assist the emperor because it was their duty to serve as aides. But problems arise when their power exceeds their station. If they abuse this power, an administrative system won’t function properly, resulting in possible corruption.

In the Joseon Dynasty, government officials wielded strong power and thus there was a relatively small chance for eunuchs to dominate power. But these days in Korea’s political circles, there is always concern that aides might hold excessive power and influence.

We still vividly remember that the Blue House under the former Roh Moo-hyun administration interfered in various government policies and caused confusion in state affairs. When the incumbent administration took office it reduced the size of the office of presidential secretaries, but it seems still to resemble its predecessor. It feels even more so when looking at the head of the Presidential Council for National Future and Vision who spoke about education policy without consulting the relevant ministry.

A person who is close to the king must not mistakenly believe that he can do anything. An aide to the president should only seek balance and harmony in policies and offer advice. He must not indulge in power and overstep the bounds of his job.