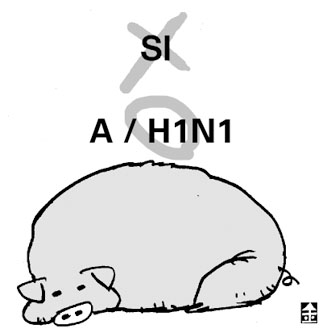 In 1530, Venetian poet Girolamo Fracastoro gave a new name in one of his poems to an ailment that was called “the French disease” during the 16th century.

The sickness, which appeared to have originated from the New World recently “discovered” by Columbus, was called the French disease in Italy and Germany.

Records show that it was called the British disease in Tahiti.

One can easily guess how the disease got so many names. Everybody wanted to hold their enemy countries “responsible for spreading the bad disease.” If Fracastoro had not given the disease a new name, “syphilis,” European countries might still be calling it by other countries’ names and getting upset with each other.

On April 30, the World Health Organization decided to use the name “type A influenza” or “H1N1” for the currently rampant flu now called swine influenza.

The reason for changing the name swine flu, which is already widely used, is to prevent unnecessary misunderstandings.

“This disease has only been spread through humans, and there is no trace of it spreading from pigs to humans,” the WHO announced.

It has also been confirmed that you can’t get this new flu by eating or touching pork, but at least one country, Egypt, has apparently ordered the slaughter of pigs to avert an outbreak.

The name of a disease spreads disgust and fear at the same time. Since the 20th century, people have come to the conclusion that it is better to avoid disease names that explain symptoms or causes explicitly for fear of upsetting too many people.

There is the claim that schizophrenia should be called “dopamine dysregulation disorder” to avoid social prejudice. The disease “hysteria,” which was jiral in Korean - already a pejorative word - is now called “epilepsy,” or ganjil, for the same reason.

“That which we call a rose by any other name would smell as sweet,” Shakespeare’s Juliet tells Romeo, but looking at the reality in the Republic of Korea, where changing a few letters of the name of an apartment complex makes a world of difference, forces us to see how sensitive the world is to names.

I hope the WHO’s decision will wash away the worries of pig farmers who have suddenly been hit with this potentially catastrophic situation.