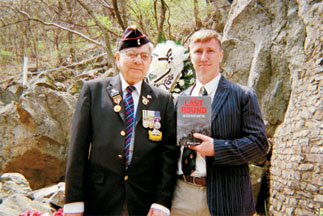 Andrew Salmon (right) with Gloster veteran David Binding at the memorial to the lost battalion at the foot of Hill 235, or “Gloster Hill.” By Andrew Salmon

The battle is legendary in military history circles, regarded as the bloodiest fought by British troops since World War II .

In April 1951, during a ferocious encounter on the Imjin River in the Korean War (1950-1953), a battalion of British soldiers surrounded by thousands of Chinese soldiers refused to retreat from their positions until they had spent all their ammunition. Only then did they try to break free.

It’s a tale of humbling bravery in conditions of unimaginable bloodshed, one ripe for countless retelling. But, surprisingly, Seoul-based journalist Andrew Salmon’s new book on the battle is the first to devote itself entirely to the story.

“There have been chapters in books and memoirs, but no one has ever written a comprehensive account using interviews with survivors,” explains Salmon, author of “To the Last Round: The Epic British Stand on the Imjin River, Korea 1951,” which was published this week.

A historian by training, Salmon said he became interested in the battle a few years ago but didn’t start writing about it until 2007. “I wished I’d started earlier,” he said, especially considering the youngest of the living witnesses to the battle are now in their late 70s.

To research the story, Salmon spent two summers crisscrossing England and Ireland, talking with veterans of the battle, visiting regimental associations, listening to eyewitness accounts in the Imperial War Museum in London, and perusing old scrapbooks and photo albums.

“Only one person didn’t want to talk about what happened that night in 1951, a medic who began suffering post-traumatic stress many years later,” said Salmon, who writes about Korea for Forbes, Monocle, The South China Morning Post, The Times in London and The Washington Times.

An old man now, the war is “still going on” for the medic “like it was yesterday.”

But just about everyone else Salmon approached was willing to revisit old memories, pleased that someone was interested. “A lot of the guys can’t remember what they had for breakfast but the details of the battle are etched on their minds,” said Salmon, who used to work at the JoongAng Daily as an editor.

The book, which involved piecing together the complex narrative and a significant amount of detail, took just under two years to write, a process that Salmon admits was at times “hellish.”

During the writing process, Salmon said he was inspired by British military historian and journalist Sir Max Hastings (“The Korean War”) and Stephen Ambrose (“Band of Brothers.”)

“Hastings’ great skill is painting the overall strategic picture and examining events with a critical eye while also enlivening his accounts of the ‘sharp end’ with the voices of those who were there,” he said.

“Ambrose is much more of an oral historian. He tends to focus on a group of men and relates history through their personal stories. I have attempted to merge the two approaches.”

So why did it take 60 years for the story of the battle to be written? Why is it that if you walk into a bookshop in Britain - a country where military history sells relatively well - you’d be hard-pressed to find any books about the Korean War?

“They fought between World War II and Vietnam, two iconic wars,” said Salmon, explaining why he thinks the Korean conflict is the “forgotten war” of the 20th century.

As the veterans advance into old age with painful memories of that dark April night still fresh in their minds, Salmon has started working on a prequel to the book that will focus on the first year of the Korean War, 1950, leading up to the events on the Imjin that took place in 1951.

“For the last few months I’ve been in Seoul, but not an hour has gone by when I haven’t been thinking about that battle on the Imjin River 60 years ago.”

Visit http://tothelastround.wordpress.com for more information on the book.