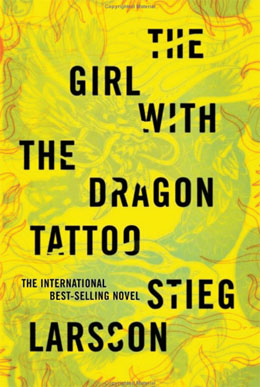 Readers of Stieg Larsson’s “Millennium” trilogy may be tempted to conflate his life with the gnawing mystery in his work.

Like his protagonist, Carl Mikael Blomkvist, the late Larsson was a journalist with his own magazine, as well as a man in an unconventional, decades-long romantic relationship with a woman he never married.

And with his sudden death at the age of 50, many feel the author’s lost chance at seeing the success of his novels smacks of conspiracy. After all, as the inside cover of “The Girl with the Dragon Tattoo” reads, “He died suddenly and unexpectedly in November 2004, soon after delivering the manuscripts for three crime novels to his Swedish publisher.”

But now that the theories have largely been laid to rest, we can say with some certainty that the timing of Larson’s death - caused by a heart attack - was just a sad coincidence.

Timing, however, is at the fore in the case of Harriet Vanger.

Forty years after the girl’s mysterious disappearance, her uncle and surrogate father, Henrik Vanger, cuts an odd deal with Blomkvist: Take the skills he normally uses as a business journalist to scrutinize corruption and divert them toward solving the mystery of who killed Harriet.

And it just so happens that Blomkvist is freshly out of work and thus available to take the case. In self-imposed professional exile after losing a high-profile libel suit, he figures there are worse ways to spend a year - especially considering the job’s fat paycheck.

In this multi-layered narrative, Larsson weaves together Blomkvist’s plight, the secrets of the sizable Vanger business empire and the clever sleuthing on the part of one Lisbeth Salander, she of the titular dragon tattoo.

The result is quite the tome for your average crime novel, especially when you consider that it’s only the first third of the Millennium trilogy. But Larsson writes one hell of a murder mystery, all the while circling back to key points in his fast-paced prose.

Haunting brutality fills the pages of this book; its original Swedish title translated to the more fitting “Men Who Hate Women.”

Salander, while central to the book’s plot, isn’t exactly the heroine. At first hired to snoop into Blomkvist’s life, Salander grows into her role as his sidekick with a fascinatingly sordid past.

Readers will surely be eager to see more of her in volume two, “The Girl Who Played with Fire,” which hits U.S. shelves in July.

Despite being one of many female victims of nightmarish violence, she displays verve and genius that make her a veritable literary badass.

Actually, that claim brings into question whether Larsson’s work is literature at all. Translated into English by Reg Keeland, the author’s words are precise, making a convoluted narrative perfectly comprehensible.

But with its pulpy tendencies and apparent anti-corporate message, The Girl with the Dragon Tattoo doesn’t exactly transcend the bounds of genre fiction. But when a novel is this tremendously entertaining, does it matter?

The Girl with the Dragon Tattoo