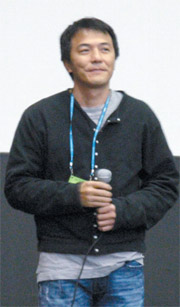 Leon Dai, a Taiwanese director, at a Saturday screening of his film in Jeonju. By Chun Su-jin

JEONJU - The small and bustling film festival taking place in this tradition-rich city in North Jeolla has drawn an impressive collection of directors of assorted nationalities.

One of the more interesting perhaps is the actor-turned-director Leon Dai, from Taiwan.

“Now I understand why so many European film directors said Jeonju film fest is a must-visit,” Dai said before the screening of his latest feature, “No Puedo Vivir Sin Ti,” which translates to “I Can’t Live Without You.”

The film is based on a true story that happened in Taiwan in 2003, and is about a father whose poverty and lack of knowledge of the legal system and how to operate within the halls of power led him to be separated from his daughter.

“No Puedo” is Dai’s second film as a director. He also directed “Twenty Something Taipei,” which went on to critical and financial acclaim in Taiwan.

In a question-and-answer session after the screening, Dai said, “When driven into a corner, the father took his daughter and went up to an overpass, which drew keen media attention.

“But the media ran it like some kind of soccer game, without any genuine interest in the father-daughter relationship. And when the public lost interest, after just one day, they stopped covering it.”

Dai was intrigued. He began researching the story and discovered how various legal and political loopholes forced the father to give up his right to care for his own child.

“I wondered why it was so complicated to express one’s very basic, very human desire,” he said.

Asked how the father and daughter are doing today, Dai seemed pleased to report that the two had been reunited.

“That does not mean, though, that the legal issues have all been resolved, because some of the same problems still exist,” he noted.

“Actually, I just read about a similar case in a local newspaper in my home country. The legal system is not perfect, and politicians are always too busy fighting with each other to fix it.”

Before he took his place behind the cameras, Dai was a noted film actor.

Speaking about his decision to change careers, Dai said, “My dream was always to be a director, even before I became an actor.

“But I think there is not much difference between being an actor and being a director. We are, after all, storytellers of some sort, and our precious medium is film.”