Festival to focus its future on indie film industry

Festival to focus its future on indie film industry 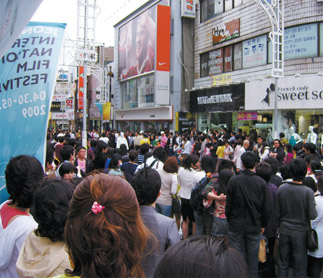 JEONJU - While concern over the new strain of influenza virus escalated over the weekend with reports on confirmed cases in and outside the country, this provincial city in the southwestern part of Korea seemed isolated from such worldly concerns. Or so it seemed.

The grand opening of the Jeonju International Film Festival on Thursday had this tradition-rich town in North Jeolla crawling with a slew of cineastes from here and abroad swarming into town.

The festival claims to be second only to the Pusan International Film Festival, which is held every fall in the southern port city of Busan. It features 200 films from 42 countries and runs through Friday.

Tickets for up to 130 films, particularly weekend screenings, were already sold out on the festival’s first day, but don’t worry, about 15 percent of the tickets for each film have been reserved for same day purchases.

Event organizers estimate that the number of visitors will reach 90,000 this year.

Jung Soo-wan, the festival’s chief curator, told the JoongAng Daily that this year is particularly meaningful for the festival as it marks its 10th anniversary, which will become the cornerstone of the next ten years.

“While we have concentrated on presenting independent arthouse films over the past ten years, we are now set to play an active role as a promoter of not only indie movies and experimental filmmakers, but also the country’s film industry itself,” Jung said.

The Jeonju Project Market, which has been unveiled at this year’s JIFF for the first time, epitomizes this goal, Jung told us. It was devised to strengthen the festival’s ties to the Korean film industry while contributing to the growth of Korean films.

“By focusing for the first time on both the film industry and the films, JIFF aims to be a major stepping stone for Korean independent filmmakers,” Jung said.

She added that the recent craze in the country over indie films such as “Old Partner” and “Breathless” will also help to sustain the indie industry.

At another program titled Producer Pitching, five young and promising producers pitched their current projects to an audience of potential investors and production companies.

One lucky producer will be chosen to receive a 5 million won ($3,876) prize to complete his or her film.