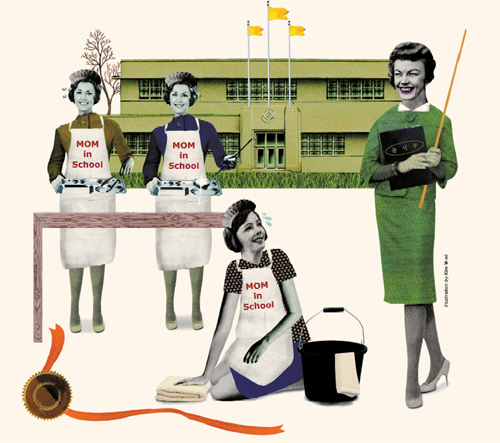 A woman living in Dogok-dong, southern Seoul, identified only by her surname Jeong, has an 8-year-old son who just entered elementary school this year.

But the son isn’t the only one going to school. His mother goes, too, just less often. She visits her son’s school twice a month to distribute food to first graders during lunch and to clean up the classroom after that.

She vacuums and mops the classroom floor, wipes the desks, sweeps the stairs, washes the trash bins, brushes off spiderwebs and waters the plants. She spends about two hours at the school each time.

“It’s hard. I wish I didn’t have to do it,” Jeong said. “It seems like my turn comes around a little too often.”

People often say that when a child enters school, the mother does, too.

In more affluent countries, schools usually hire janitors to do the cleaning but in Korea, students are assigned to those tasks. However, first and second graders are considered too young to do chores like distributing food at lunchtime and cleaning classrooms, so they ask their mothers to do it instead.

It is not certain when the practice started, but it has been going on for decades.

The way it happens is quite simple. Schools send a letter to parents soon after their child enrolls asking if they are “willing and able” to do chores on behalf of their children. Those who sign up are assigned to a team of two or three parents, usually the mothers, who have duties around two times a month.

On the surface, this may appear to be a voluntary act of goodwill, but the back story tells another tale.

Most mothers worry that if they don’t help with the cleaning, the teacher might discriminate against their child.

“Mothers aren’t happy about it but they can’t really talk about it,” said a woman surnamed Lee who lives in Cheongdam-dong, southern Seoul. “Most of them are afraid that if they complain, their child might be disadvantaged.”

According to Jeong, 35 students in her son’s class and 33 mothers signed up. The two women who didn’t apparently have full-time jobs.

“The fact that the mothers are doing these chores is taken for granted,” Jeong said.

“The custom has been going on for many years and it’s just accepted,” she said.

“Most mothers expect the teachers to do it,” Lee said. “I’ve heard many stories about teachers giving orders to mothers.”

“My child’s teacher, with her arms folded, pointed to the corner of the room and asked me to clean it,” a mother wrote on a Web site (http://cafe.daum.net/momcry). “It made me mad and I wanted to know what the teacher thought of me.”

Working mothers are not completely exempt from cleaning duty. Some take a day off from work to do their time or they may ask their own mother or mother-in-law for help.

If that’s not feasible, and they can afford it, they hire someone to do the job for them, paying between 20,000 won ($15), to 30,000 won. Stationery stores in front of elementary schools often carry advertisements for people offering this kind of service.

But sending a hired hand creates other problems. Working mothers say they feel estranged from the teacher and the other mothers because, unlike the mothers who don’t work, they aren’t able to talk as often with their child’s teacher or socialize with the other mothers.

“After all, cleaning and distributing food are not as important as meeting and talking to teachers,” said “Kim,” who lives in southern Seoul’s Songpa District.

The school duty has always been a headache to mothers, and in some cases, fathers, with young children who have just started school. But things were much worse in the past.

Until a few years ago, schools did not even ask whether the parents were willing or able to do the chores. They just assigned parents to certain dates and sent out the schedule. This was changed only after a group of mothers took matters into their own hands and protested against the Seoul education authority.

In October 2004, Cho Joo-eun, a mother of two children, opened the aforementioned Daum Internet cafe, which is called “Mothers against Food Distribution Duty.” It now has 570 members.

“When my turn came around, I would go to school, or my husband did. If that wasn’t possible, I asked my mother-in-law to go instead and gave her 20,000 won,” Cho said. “I was fortunate to have someone who could help me, but I was curious about what other people were doing.”

At the time, Cho was earning a doctorate in women’s studies. For her dissertation, she interviewed a number of female factory workers in Incheon and Bucheon and realized that their biggest concerns were related to child care.

“Factory workers can’t easily take a day off or leave even for a few hours. Most of them are from rural towns and cannot ask for help from their parents or in-laws,” Cho said.

“The whole system is based on the assumption that all children have mothers who can be called up at any time in the service of their children,” Cho said. “It is an exaggeration, but the children are like hostages and their mothers are like slaves.”

In 2005, Cho and a group of other cafe members started picketing in front of the Seoul Metropolitan Office of Education.

In response, the Seoul education authority sent letters to over 500 elementary schools asking them not to force mothers to clean schools and suggested that older children get involved or that schools hire people to do it instead.

Things have improved, Cho said, but the practice has not disappeared completely. The only solution, she said, is for the government to increase funding to schools so they can try to hire help.

According to the Seoul education authority, however, it would cost billions of won to replace the mothers with alternative hired help in all 547 elementary schools in the city.

“The labor costs are just too much for us to handle,” said Gwon Sun-ju, deputy director of elementary school affairs at the Seoul Metropolitan Office of Education.

Gwon said that all mothers distribute food at schools on a voluntary basis, unlike in the past. The schools say the same thing.

“We don’t force mothers to come here to do the work,” said Yun Geum-hyeon, vice principal of Gaewoon Elementary School in Seongbuk District, northern Seoul. “We didn’t ask the mothers to come.”

One reason that many schools, including Gaewoon, continue to rely on the mothers to do the chores is that they don’t have large cafeterias where children can have lunch at the same time.

Most of the schools were built years ago when there were no catering services as there are today. Students in schools like these still eat in their classrooms, with the mothers hand-delivering meals. Inevitably, classrooms get dirty.

“In a country like Korea, where interest in education is high, there is a possibility for abuse,” said Kim Dal-hyo, a professor of education at Dong-A University.

However, there are some mothers who feel there is a positive side to all of this. Lee in Cheongdam-dong said it is nice to see how her child is doing in school and talk to the teachers. Other mothers say that going to their child’s school helps them network with parents. Some mothers even volunteer to help when it is not their turn, Lee said.

Still, most mothers say the negatives outweigh the positives. A teacher with the surname Lee, who is also a mother herself, said she understands how the mothers of her students feel.

“When my son entered elementary school, I was working full time and I didn’t have time to do the chores at my son’s school,” said Lee, who lives in Gwacheon, Gyeonggi. “I hope that schools will be more considerate and stop putting the burden on mothers.”