Blue House tries to plug the holes in PR machine

Blue House tries to plug the holes in PR machine 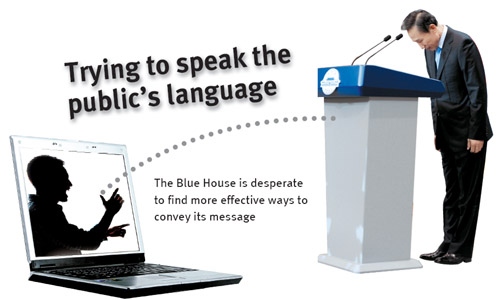 By this time last year the Lee administration had all but spent whatever political capital it gained during the 2007 election campaign and was borrowing heavily. Protests over the decision to renew U.S. beef imports had highlighted an important lesson: A top-down approach to government without clear lines of communication would not wash.

Following the debacle of the so-called candlelight vigils and violent clashes last year on the streets of Seoul, the Blue House made communication with the public its top priority.

The first logical step was to start blogging. Starting last year, the Blue House ordered ministries and government organizations to set up their own online facilities for keeping the public up to speed on new policies, other news and events, trying to capitalize on the country’s strong Internet culture. Having witnessed how the Internet had mobilized hundreds of thousands of protesters last year over the beef issue, it was a logical step to take.

“Blogs have a less official form and are thus are more effective in reaching out to the public than official Web sites,” said Geum Ki-hyeong, an official in the Culture Ministry. “They’re also cheaper to set up.” Thirty-six government organizations and ministries now maintain about 60 blogs at portal sites such as Daum. The official said that the culture ministry’s blog, “Policy Sympathy,” receives anywhere from 20,000 visits to 200,000 per day. “Our blog consistently ranks in the top 12 to 15 blogs in the country in terms of popularity,” the official said. A foreign ministry official speaking on condition of anonymity said that the Blue House press office is in constant contact, monitoring the operations of those blogs. “They are very keen on keeping tabs on everything,” he added.

For a besieged Blue House it certainly made political sense to aggressively exploit all possible means of communication to get their messages across.

Starting in its own backyard last August, the government forced out the former head of the state-run KBS appointed under the previous Roh Moo-hyun administration, Jung Yun-joo, causing heated political controversy. Around 40 KBS workers supporting Jung scuffled with security guards on the new chief’s first day in office. Incoming administrations have usually brought in a Korea Broadcasting System head sympathetic to their political cause.

But KBS reporters are used to this sort of government interference. “I think we are moving away from a state in which the government has some control over our coverage but you can’t rule out that there is an invisible hand that may wield some influence,” said Geum Cheol-young, a senior reporter specializing in foreign affairs. “Jung had a reputation for not kowtowing to political forces but his association with the former administration no doubt played a role in his dismissal.”

The cable news broadcaster YTN, partly owned by the government, also saw its head replaced last year. The company is still reeling internally. Around six YTN employees have been fired because they opposed the move.

But it’s the Internet that the administration has set its sights on. In December, the Korea Communications Commission passed amendments to the country’s Information Act, forcing more Web sites to require users to reveal their real identity when posting messages.

However, government efforts to combat what it views as a sea of cyber disinformation and to force the country’s netizens to behave more appropriately online hit a snag earlier this month after Google decided to sidestep the law that requires Web sites with more than 100,000 daily users to confirm the real identity of anyone who posts comments or uploads content. The U.S. administration announced it would block users with South Korean nationality from uploading content and posting comments on the Korean Web site of Google-owned YouTube, effectively rejecting the real identity system.

Another blow came when the Seoul Central District Court found the blogger Park Dae-sung, better known as “Minerva,’’ not guilty last month of spreading false financial information with the intent to hurt the public interest. Prosecutors had argued that Park’s comments unduly influenced the country’s economy, claiming that his comments had weakened the Korean won.

Despite the setback, the Lee administration has not shied away from what it believes is a crusade against slander. Currently, a law that seeks to punish people who slander others with a jail term not exceeding two years and a 10 million won ($7,890) fine is pending in the National Assembly.

Last week on the first anniversary of the controversial episode of MBC’s “PD Diary” that became the catalyst for the massive beef protests last year, prosecutors detained two producers and two writers who worked on the program.

Of course, there are tried and tested ways of putting a lid on the media. The Seoul Metropolitan Police Agency started an investigation on the singer Shin Hae-cheol last week after he recently applauded North Korea’s rocket launch on his Web site. “In line with its sovereign rights and international norms, the Democratic People’s Republic of Korea [the North’s official name] has successfully launched a rocket and I congratulate them,” Shin wrote. Conservative civic groups promptly accused the singer of violating the country’s long-standing National Security Law. Naturally, North Korea chimed in. “It’s very natural that singer Shin Hae-cheol has written a piece that reflects his pride as a member of the same race regarding North Korea’s successful rocket launch,” said the Minju Chosun, the official mouthpiece of North Korea’s cabinet.

Needless to say, experts are divided on the merits of the administration’s approach to communication.

“If you look back, protesters used the candlelight vigils to express their feelings about the one-way communication method of the Lee administration,” said Cho Dae-yeop, a professor of sociology at Korea University. “The current measures that put limits on the Internet are essentially an attempt to limit open debate.”

Others think that the strings that come with the powerful presidency are an obstacle to true communication with the public. “Once you become president there is a tendency to listen to your inner circle. What is meant by communication then is often one-sided,” Kim Chang-ryong, a professor of media and politics at Inje University, pointed out.

Regardless of the debate, what matters most to the government is the public.

A recent poll conducted this month by Research and Research, a private research firm, showed that President Lee’s popularity has risen toward the 40 percent mark from under 20 percent at one point. Government officials say these figures prove that their policy is working. “What we are trying to do is instill a social atmosphere where people stick to the facts and truth,” said a Blue House official who declined to be named.

The government, keen to improve how other countries view Korea, has tried to set up better lines of communication with the foreign press. But, apart from official press briefings, the foreign press is still excluded from background briefings that provide more information.

This old press corps system, one that allows the domestic media to dominate, makes it hard for the government to open up background briefing sessions. Since the government needs the cooperation of the local press from time to time, the current administration is reluctant to press the issue.

The communication agenda is also impacting internal communications. Increasingly, the Lee administration has come under fire for failing to present a unified voice on policy. In the aftermath of North Korea’s rocket launch, the Foreign Ministry argued for Seoul’s participation in the U.S.-led Proliferation Security Initiative, a program that aims to curb the spread of weapons of mass destruction. But the Unification Ministry urged a more cautious approach.

Consultative meetings between the government and ruling party have had mixed results as key policy agendas singled out by the Blue House have met resistance even from within the Grand National Party. By Oh Jong-taek

Such mishaps have occurred with enough frequency to prompt President Lee to openly voice his concern. “We have to fine-tune policies between departments, the government and the ruling party so it does not appear that there are different opinions regarding agendas,” President Lee said in a recent cabinet meeting.

The latest case occurred only a week ago when 70 Grand National Party lawmakers opposed or abstained from a vote on revising the Financial Holding Company Act. The revision would allow industrial conglomerates to invest up to 9 percent in financial holding companies. Although the Lee administration singled this measure out as a major reform, Grand National Party lawmakers revolted openly, sparking a debate within the party whether the current party leadership was competent enough to stay on top.

Earlier, some Grand National Party lawmakers opposed a bill on the transfer of income tax, which was eventually passed only after intense debate. In addition, Kwak Seung-jun, the head of the Presidential Council for National Future and Vision, has made several policy announcements intended to curb private education costs without consulting the relevant government ministries, such as the Education Ministry, which has openly questioned Kwak’s ideas, such as preventing cram schools from operating after specific hours.

The problem for Korea is that the country handed President Lee the keys to the Blue House, hoping that his “bulldozer” reputation, gained while heading Hyundai’s construction business, would lead the country to new economic heights.

But they may have forgotten one thing: Communication is hardly the strength of bulldozer types.