From right, to left and right again

From right, to left and right again 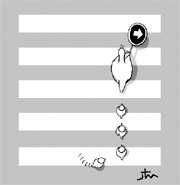 The majestic statue of Admiral Yi Sun-sin overlooking the Sejongno intersection in central Seoul has, over the past four decades, provoked an irksome dispute among historians due to the questionable positioning of his sword.

The war hero is recorded to have kept the sword to his side at all times, even when resting from a weary and onerous naval battle against the Japanese in the 16th century.

The problem with the statue is that Admiral Yi has his right hand on the sheath, which means he would have drawn his sword with his left hand. There are no records of Yi being a lefty.

Some other experts say the display of the sword on Admiral Yi’s right side can imply a surrendering posture to invaders. A right-handed person would draw a sword from his left side when surrendering.

Sword-bearing Japanese samurai in the old days roamed the streets while keeping to the left side of the road to avoid collisions and unnecessary squabbles with samurai coming from the opposite direction.

If you ask the Japanese, some will contend that the samurai pedestrian legacy led to Japan’s left-side driving and the configuration of the right-side steering wheel.

Korea shifted to right-side driving after it broke free from Japanese rule, but somehow apparently adhered to the left-side pedestrian traffic rule.

In 1921, the Japanese colonial government ordered pedestrians and motor vehicles to uniformly keep to the left side.

After the Japanese left Korean soil, U.S. military vehicles drove on the right, but cared little about where pedestrians walked.

As children, we all learned the traffic safety song, “People keep to the left and cars to the right. Let’s cross the street after looking right and left.”

The government recently announced that it would undo the 88-year-old pedestrian traffic legacy to encourage people to walk on the right side of walkways.

This allows people on the crosswalks to cross while watching for oncoming vehicles, thus reducing the risk of accidents. The change makes better sense and walking more natural, given that nearly nine in 10 Koreans are right-handed.

It is actually strange that politicians never got around to changing the traffic rule until now, given their obsession over whether one is on the right or the left of the political spectrum.

But how effective this change in pedestrian walking habits will work to reduce traffic accidents remains questionable.

Lack of consideration and tolerance appears to be a bigger reason behind the country’s disgraceful first-place spot in traffic accidents.