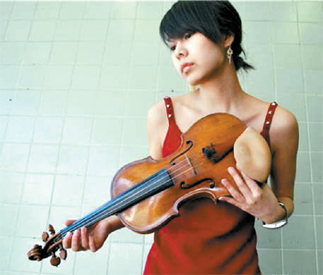 Sue Son is a strong candidate for a semifinal win on “Britain’s Got Talent.” Provided by Sue Son

People just love drama. Needless to mention, TV loves it all the more.

That was certainly one of the factors that catapulted Korean violin student Sue Son into sudden stardom, after she and her long-time friend Janine Khalil auditioned for “Britain’s Got Talent.” The audition took place in January this year, but aired last Saturday in Britain.

Calling themselves “Addicted,” the classical music duo - Son on electronic violin and Khalil on keyboard s - launched into their number but the judges cut them off after just a few seconds because they felt the two musicians weren’t a good match.

But in a surprising turn of events, Simon Cowell, the notoriously tough judge of both “Britain’s Got Talent” and “American Idol,” saw something special in Son and asked if she would audition as a soloist. Son hesitated at the unprecedented offer, but with the audiences encouraging her with cheers, she finally accepted.

She then went on to wow the judges with a rendition of Vanessa Mae’s “Storm.”

It was a rare incident on the two-year-old show, and of course, the tabloids were desperate to know if Son’s decision to perform solo affected her friendship with Khalil.

The 23-year-old Son is pretty certain the relationship is intact.

“I don’t regret the decision I made. I think anybody would’ve made the same decision if he or she were in the same situation,” Son said in an e-mail interview with the JoongAng Daily. “I believe that friendship isn’t something that breaks nor forms overnight. I’m just concerned that all the hype will hurt my friend’s feelings.”

For now, Son is still adjusting to her new fame.

“Here in Britain, so many people recognize me now. It’s hard to go out. I even heard that the same violin case as mine is being sold a lot after I held it in the show,” Son said.

This Tuesday, she made an appearance on ITV’s “This Morning” along with some others going on to the semi-finals of the talent show. The video clips of her two auditions on YouTube have had more than one million views.

Born in Seoul in 1985, Son began playing the violin at six. Two years later, her family moved to Britain and she got her education at the Royal Academy of Music and later at the Royal College of Music.

“I consider interacting and talking with the audience the most important thing in performing. I enjoy that very much. It’s who I am,” the musician said.

That is why Son decided to pursue electric music, with the hope of becoming a professional musician.

In 2006, she transferred to Guildhall School of Music and Drama and is expected to receive her bachelor’s in music in July.

For Son, participating in Britain’s Got Talent was “a test for myself, whether or not my music can really connect with the audience,” she said.

Despite living overseas for many years, Son says she is Korean to the core. She speaks perfect Korean and is keen on Korean culture and traditions.

“I didn’t have much time to prepare for my first audition [as a soloist]. But this time, I’ll do the best I can. I hope people in Korea will root for me, as I’m fighting here on my own,” she said.

One of Son’s strongest competitors in the current series is Susan Boyle, the 47-year-old Scot who impressed judges and viewers with “I Dreamed a Dream” from the musical “Les Miserables.”

Britain’s Got Talent has made stars of ordinary people like Paul Potts, the winner of the first series. That’s some tough competition.

And with three more auditions set to take place every Saturday until May 23, it remains to be seen how far Son’s newfound fame with take her.

The show’s semifinals will take place from May 24 to 29. Fans can pick two contestants for the live final on May 30.