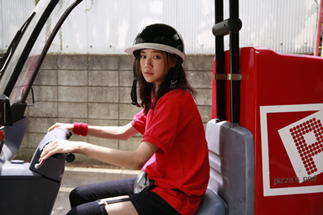 Some cities in the world are simply unlike anywhere else. Take Tokyo, with its seething masses of people passing beneath an endless fog of neon and noise. Yet surprisingly few non-Japanese filmmakers take advantage of this place, where more people live than anywhere else in the world.

So it’s exciting to see three non-Japanese filmmakers - Michel Gondry, Leos Carax and Bong Jun-ho - present their portraits of the city with the anthology film “Tokyo!” in the vein of “Paris, je t’aime.”

The subject matter of Gondry’s opening act, “Interior Design,” is right in line with his other film, “The Science of Sleep” - about living with the quirks of an artist. Akira (Ryo Kase) is a budding filmmaker who comes to Tokyo with his girlfriend Hiroko (Ayako Fujitani) to make it big. But Akira mocks her for having no ambition - and it takes a bizarre transformation and a new home to find someone to appreciate her.

Anyone who’s tried to find an apartment in Japan will nod at the parade of tiny, strangely designed and/or infested units the pair visit. The ensemble is deeply characterized and the gentle plot provokes smiles rather than belly laughs, making this a fine introduction.

Next, Carax’s “Merde” goes beyond fantastic metaphor into the just plain weird. A man who speaks a language all his own (Denis Lavant) lives a misanthropic existence among the forgotten detritus left over underneath the city from World War II, occasionally rising to terrorize the citizens. The message - made explicit by the use of the theme and sound effects from the original “Godzilla” - is that a real monster is not quite as funny. But there just isn’t enough material in this premise to fill out the time, and so what should be shocking ends up almost dull.

The final and best part is by Korean director Bong Jun-ho of “The Host” fame. “Shaking Tokyo” tackles a romance between two hikikomori - Japanese shut-ins who don’t leave home for years at a time. Thanks to its rising female star (Yu Aoi) and relatively normal plot, Shaking Tokyo may appear the most “mainstream” of the three, but it’s also the most sophisticated. Teruyuki Kagawa puts in the best performance in the film, hitting a note of determination tempered with quiet, antisocial panic.

As a whole, the film is surprising, turning the lens toward not the city’s flashing lights or “Blade Runner” mystique, but (with the exception of Merde) on the regular people who live and love and make the city what it is. And for that, it is probably much more successful.