[Talk of the town]
‘I’m not a druggie,’ insists DJ Koo 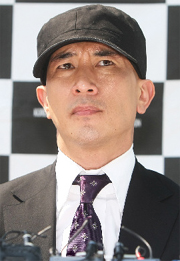 Singer Koo Joon-yup said he has never used recreational drugs and that the accusations against him are false. Speaking at a press conference Wednesday he pleaded his innocence concerning investigations on his use of drugs.

The former member of the popular duo Clon said it was humiliating to be suspected of such a crime.

“People who have been arrested for drug abuse mentioned my name [to the police] just because they saw me at music clubs. I go to these places because I’m a person who does music for a living,” he explained, denying recent rumors about being a drug addict.

The 40-year-old currently works as a disc jockey under the pseudonym DJ Koo. “I’ve never used drugs and I don’t know any drug dealers personally,” said the former singer, who’s been investigated three times since 2002 for drug taking.