The Mummies and their age-old tales

The Mummies and their age-old tales

“Mummy of Neskhonsu in cartonnage wrapping.” An X-ray shows that a woman in her 20s is wrapped together with her twin children.

In ancient Egypt, people believed in the afterlife and thought that eternal life was possible when the body, soul and life force were wholly merged.

They also believed that the soul and the body separate at the time of death and the body was a resting place for the two elements. Thus, to let the soul and life force find peace and comfort in the body, preserving the body of a dead person was of the highest importance.

The belief led to a practice in which the body was mummified to an extent that it could remain as close to its original state as possible. Most people are familiar with Egyptian mummies but few Koreans have actually seen the real thing from Egypt.

An ongoing exhibition titled “Egypt, The Great Civilization” at the National Museum of Korea in Yongsan District, central Seoul, is a rare opportunity to see mummies plus over 200 artifacts from major ancient Egyptian dynasties, covering 3,000 years of the civilization since 3000 B.C.E.

This exhibition marks the first time Egyptian mummies have been displayed in Korea, and they are on view until Aug. 30.

“Mummies are not just interesting objects to look at,” said Yang Hee-jeong, a curator of the exhibition. “They reflect the ancient Egyptians’ belief in the afterlife.”

One of the reasons Egyptian mummies have not been displayed in Korea previously is the problem of preservation. “The temperature and humidity of the display space behind the glass has to be maintained at the same level as the place where they were originally exhibited,” Yang said.

Egyptians initially placed the body in a pit in the desert without a coffin and the salty sands dried up the body and preserved it as it was, according to Yang and a booklet provided by the exhibition.

However, Egyptians came to build tombs with bricks and stones and realized that the body started decaying after being placed in such tombs. So, they began developing ways to preserve the body, resulting in methods of mummification. 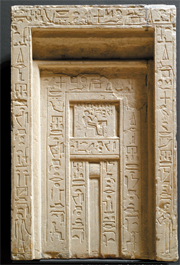 “False Door of Init.” The door connects this life with the afterlife.

According to the writing of Greek historian Herodotus in late fifth century B.C.E., the mummification process lasted 70 days. There were different methods used but generally internal organs were removed because they decayed easily. Brain tissue was removed by inserting hooked rods into the nasal passages.

The organs were removed from thorax and abdomen within the first few days and were put in canopic jars. It took at least 30 to 40 days to properly dry the body inside and out by means of natron salts, a mixture of sodium carbonate and other chemicals.

The body was wrapped in linen after desiccation and the application of resin. The linen wrapping formed distinct layers and the resin adhesives were poured onto it at various stages. The resin on the linen embalmed and fastened the wrapping. Then, the body was wrapped with bandages and plaster was applied before the surface was elaborately painted. Then the body was laid in an inner coffin, which was then placed in an outer coffin, as shown in the exhibition.

All the mummies and artifacts in the exhibition are on loan from the Hapsburgs’ Egyptian Collection at the Kunst-historisches Museum in Vienna.

The exhibition was arranged by the directors of the National Museum of Korea and those in Austria, and this is the first time the mummies in this collection have travelled outside Europe, according to Dr. Reginal Hoelzl, director of the museum’s Egyptian and Near Eastern department.

The Egyptian collection in the museum is the fourth biggest in Europe after those in Berlin, London and Paris, Hoelzl said.

Four human mummies as well as a mummified crocodile, cat, ibis and falcon are on display, too. “The Mummy of Neskhonsu,” which was produced around the seventh century B.C.E., is particularly noteworthy. It’s a woman named Neskhonsu buried between the ages of 25 and 35.

The mummy is still wrapped with bandages but through computerized tomography, two baby mummies were found between the legs of the woman. The babies are assumed to be twins who died before or after birth. The babies were wrapped in layers of bandages together with their mother. 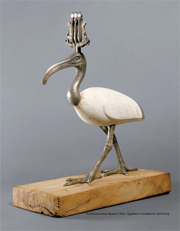 “Statuette of God Thot Depicted as Ibis.” The ibis was considered a holy animal that symbolizes Thot, the god of wisdom and writing

Another interesting mummy is the “Mummy of a Woman,” which was also produced around the seventh century B.C.E. The woman was between 20 and 25 at the time of mummification. It is easy to spot a hole in the linen around the mummy’s face. It was created when thieves presumably tried to see what was behind the linen.

“We don’t undo the wrapping anymore because we can see what’s inside through X-rays,” Hoelzl said. “But in the past they used to open up the bandages in Europe and America. The unwrapping was a big event and people gathered to watch it. After that, they put the bandages back again.”

The artifacts are only part of the 15,000 artifacts at the museum in Vienna. They were collected over many years. The Hapsburg family started collecting Egyptian artifacts in 16th century but the collection remained small.

The Egyptian collection was expanded through gifts and acquisitions, most significantly by objects purchased in Egypt in 1821 by the physician Ernst August Burghart. Most of the additions in the early 20th century were made on archaeological digs in Egypt and in the south of Egypt by the Austrian Academy of Sciences.