Chimes that echo on Jongno

Chimes that echo on Jongno 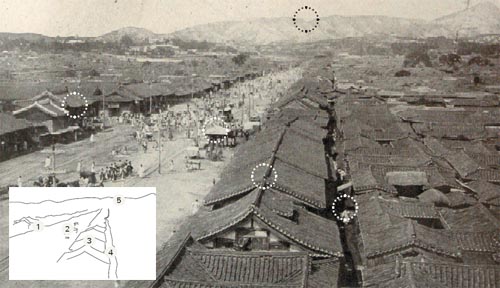 Jongno, pictured right, had a bell (1) that controlled traffic in and out of the city. The waiting area for street cars (2), government-approved stores called yukuijeon (3), and Pimatgol, an alleyway used by commoners (4) were also in the area. Mt. Inwang (5) is in the background. Provided by Myongji University-LG Yeonam Library

Jongno, the 2.8-kilometer (1.7-mile) long road that bisects Seoul horizontally, is still the center of the Korea road network.

And the proof is in the stone marker at the road’s western end, where the Memorial to Emperor Gojong’s Enthronement and Adoption of the Imperial System stands.

Although ongoing construction has covered up both the stone marker and the memorial for the present, the stone marker proclaims that the site is Seoul’s “Kilometer Zero,” the point from which all distances are measured.

According to records, Jongno was built a few years after the Joseon Dynasty (1392-1910) was founded, emerging as a major commercial district called Unjungno.

Jongno is still one of the busiest, most vibrant commercial hubs in Seoul, bustling with tired office workers, aggressive shoppers and foreign tourists asking for directions.

But today the buildings or landmarks of Joseon are almost nonexistent - or soon will be.

Jongno gets its name from a bell.

The Bosingak Bell travelled the length of the country to its present location on Jongno when it caught the eye of royalty. 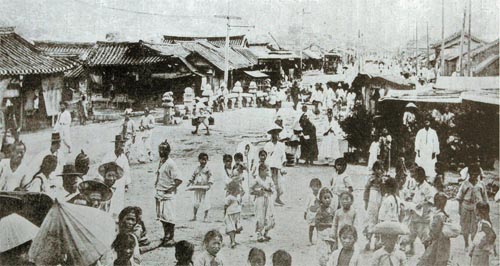 There used to be a stone bridge, seen in the center, called Hyejeonggyo at the western end of Jongno.

“The king went to Gwangju and saw the newly made bell. [...] He ordered some 1,300 soldiers to move it to the capital,” according to the Annals of the Joseon Dynasty dated April 4, 1398.

The king here refers to Taejo (1335-1408), the founding king of Joseon, and people began to call the road Jongno, literally Bell Road.

The bell had important functions in the capital. It was rung to signal the opening and closing of the city gates every day and also to alert people in case of fire, according to historical records.

Designated Korea’s National Treasure No. 2, it’s the biggest bell ever made in Korea. A map of Seoul in the book “Problems of the Far East” by George N. Curzon clearly marks the location of the bell, calling it the “Big Bell.”

The name Bosingak, which we use today, didn’t come about until the 19th century, historians say.

The bell was lost to fire and re-cast numerous times during the Joseon Dynasty, according to the Annals of the Joseon Dynasty. Experts reckon that a bell like Bosingak would last around 400 years, which is why the bell we see today replaced the old one in 1985.

The tower is also very different to the one that Taejo had built to house the bell at the end of the 14th century.

“What’s notable is that the tower was facing north before. Today it faces about 45 degrees to the west,” said Ahn Chang-mo, a professor of architecture at Kyonggi University.

“The change was inevitable with the advent of streetcars. For them to make smooth turns, the corners had to be rounded, not sharp the way it used to be,” the professor explained.

Another signature structure in Jongno during the Joseon era were sijeon, stores licensed by the government.

“The government licensed certain stores to regulate commerce because there were a lot of squabbles between businesses over space as stores haphazardly sprang up,” said Park Eun-suk, a researcher at the City History Compilation Committee of Seoul during a recent lecture on Joseon markets.

“Stores at that time were not as big on advertising and marketing as today. They didn’t have any signboards and displayed only a few items out front. They kept the best items deep inside,” said Park, the author of two books on the history of the Korean marketplace.

The American travel writer Burton Holmes (1870-1958) published a well-known photograph of yukuijeon in Seoul in his book “Burton Holmes Travelogues,” as pictured top.

“If you compare the size of the yukuijeon with the people walking in the streets and the regular houses, you get a sense of how huge these stores were,” Ahn said.

Most people think Joseon-era buildings were one-story structures, Ahn says, but if you look closely, some had attics.

According to the history book “Cheonggye Stream is Alive” by Lee Kyeong-jae, published in 2002, the area with the yukuijeon also functioned as a square where the police punished criminals as curious passersby looked on.

In the final years of the Joseon Dynasty, buildings other than stores were built along the road, including Korea’s first electric power company - Hansung Electric Company - in 1898; the Young Men’s Christian Association in 1907; and Korea’s first commercial movie theater Umigwan, built in 1910. 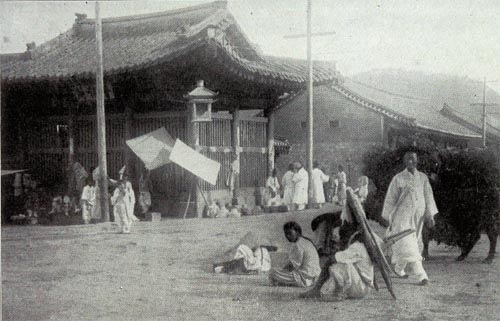 The bell tower has been rebuilt many times over the last 600 years. Provided by Myongji University-LG Yeonam Library

Today, only the YMCA building remains, rebuilt after collapsing during the Korean War (1950-1953).

During the Joseon Dynasty, every time a high-ranking official passed by either on a horse or in a palanquin, commoners had to stop what they were doing and prostrate themselves on the ground until the dignitaries had passed.

Because of Jongno’s proximity to government offices and the royal palaces, this custom was a headache to people wanting to get on with their business. To avoid this inconvenience, people began using an alleyway along the side of Jongno as an alternative. This thoroughfare, pictured above, became known as Pimatgol, literally meaning “a path to avoid horses.”

Over the years, clusters of bars, some of which were frequented by prostitutes looking for business, popped up, as well as restaurants selling rice soups and broths for hangovers.

And, surprisingly, despite the major transformations that the city has undergone over the years, Pimatgol retained a sense of its identity well into the latter half of the 20th century. 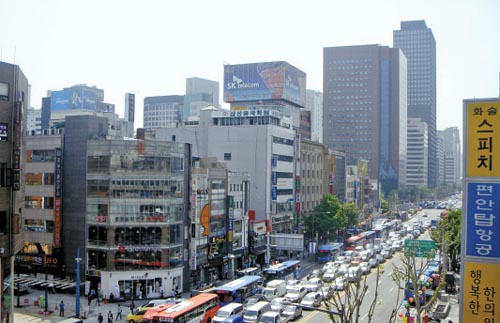 The high-rise buildings lining Jongno have transformed the landscape of this commercial area. By Kim Hyung-eun

Although some people found the shady, three-meter-wide road rather charming, redolent of former times, the road has often surfaced as the subject for city redevelopment plans.

Stuck between two voices - one for preserving the road and the other for cleaning it up - Pimatgol survived several more years.

But in March this year the Seoul city government announced a final redevelopment plan in response to repeated requests by city development companies over the last couple years.

As of now, about 80 percent of the bars and restaurants have pulled out of the area. “We plan to move soon, too,” said a manager of Hongjinok, a broth place near Pimatgol that has been there for 25 years.

“Of course it’s sad to leave this place, but there’s no point in fighting to stay when everyone has already left,” she said, declining to be named.

The alleyway that once was a saving grace for people looks to be heading to the history books, like many other structures along Jongno.