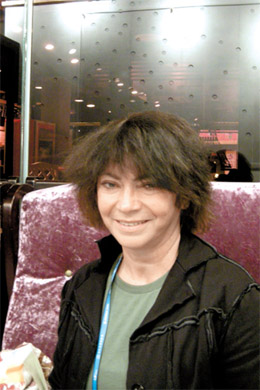 It was Jocelyn Saab’s interest in Korean cinema that brought her all the way down to Jeonju, in southwestern Korea.

The Lebanese director is a member of the jury of the Jeonju International Film Festival’s Network for the Promotion of Asian Cinema Award.

She said that the films she has seen at the festival lead her to believe she is witnessing the emergence of a new generation of Korean directors.

“I was astonished by the way that Korean directors approach real problems. They say things so clearly, and just put everything on the table,” Saab said Saturday in an interview with the JoongAng Daily.

The Network for the Promotion of Asian Cinema, Netpac, is an international organization of 29 member countries established in 1990. It focuses on the development of Asian cinema, including critics, filmmakers, festival organizers and curators, and is currently considered the leading authority on Asian film. The group of Netpac award winners includes two internationally recognized Korean directors - Lee Chang-dong and Kim Ki-duk.

Saab is a long-time fan of Korean film, and Kim, who is known for his originality, is her declared favorite.

“I was fascinated by the way he talks about the relationship between love and death in films, which was what led me to discover Korean film,” she said.

“Among his films, ‘The Isle’ and ‘Spring, Summer, Fall, Winter... and Spring’ were particularly impressive to me.”

Saab, who is herself the director of about 30 documentaries and three feature films, was originally a war reporter. She covered the Lebanese Civil War, beginning in the mid-1970s.

“While I was working as a war reporter, I became highly sensitive to the issues of the day, which led me to become an independent documentary filmmaker. I later switched to directing feature films because I felt that the documentary form was no longer flexible enough to show the reality.”

According to Saab, the festival has played an important role in Korea’s burgeoning independent film industry.

“This festival has been a true promoter of independent films, and it has a lot of potential for growth,” she said.