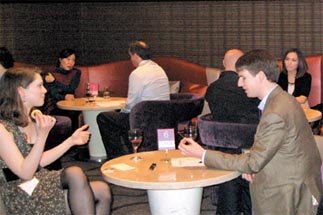 Participants chat at a speed dating event organized by local matchmaker Sunoo specifically for expat singles in Korea. The dates were at the bar Blush in the Grand InterContinental Hotel in southern Seoul. Provided by Sunoo

Speed dating is not a new phenomenon in the capital.

There have been many well-publicized events in newspaper and television reports extolling the drama of couples doing their best to impress in the allotted time, which for those who get along might seem too short, but for others far too long.

One local company is attempting to pin a new look to its speed dating business by targeting expatriate singles in search of romance in its efforts to hit the multi-million dollar global matchmaking industry.

But overcoming expectations among people from different cultures remains a challenge if the Korean firm is going to achieve its goals.

The scene is familiar to anyone who has dabbled in speed dating: a softly lit bar, appropriately called Blush, in the Grand InterContinental Hotel in southern Seoul where around two dozen neatly attired men and women settle in cozy chairs chatting over plates of food from the refreshments stand. 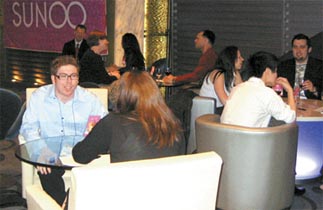 After five minutes, a bell rings and the men stand, offering their, “Thanks, it was lovely chatting,” and then switch to the next table and another “date.”

This event, which took place on a recent Sunday afternoon in April, was arranged by Sunoo, one major matchmaking company in Korea, with a slight twist.

All the participants were expat members of the company’s Web site, mostly aged from 25 to 40, a mix of English teachers, college professors, financiers, business professionals and actors.

The Blush event was a first, according to Erica Oh, manager of Global Service Team at Sunoo, because it was the first to be held by one of Korea’s major matchmaking companies. Similar events for expats in Seoul are usually organized by individuals and not by the pre-eminent local dating firms that, until now, have exclusively dealt with Koreans.

“We recently launched matchmaking service targeting foreign singles starting with English-speaking singles in Korea, which is the first of its kind by a local matchmaking company, through our bilingual Web site Couple.net,” Oh confirmed. 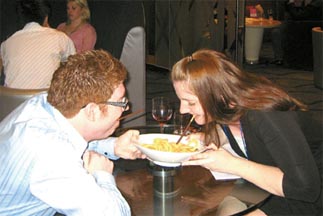 “And today’s speed dating event, dubbed ‘Romancing Korea,’ is part of offline activities aligned with our online matching services where select online members are invited to meet their potential mate in person,” she added. The speed dating event cost $80.

Duo, the country’s largest matchmaking company and a major rival of Sunoo, said it has no plan to embark on such a matchmaking service targeting expat singles.

“We have invested more than $10 million over the past eight years to develop our Web site into a global matching tool, which I can say is the most efficient and scientific matching gateway in existence today,” said Lee Woong-jin, Sunoo’s CEO.

“Our bilingual Web site has significantly lowered language barriers allowing us to build a cornerstone to become a global matchmaker. We have this plan to grow Seoul into a matchmaking hub by means of our patented IT matching systems,” Lee added.

The company, which claims to have matched 20,000 local singles since the company was founded in 1991, runs two different matching systems.

“Self Matching allows users to set up dates themselves online, letting members search profiles on their own under options such as age, family background, income and occupation,” Oh said.

The other service is more personalized and involves the company’s Match Consultant, where, according to Oh, a personal matchmaker arranges for two parties to meet after analyzing each customer’s profile. 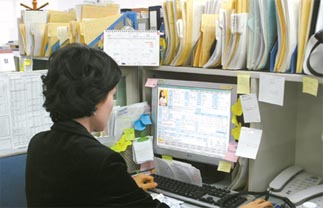 A matchmaker for a local firm checks the profiles of people seeking dates. [JoongAng Ilbo]

“By the good offices of a matchmaker, both parties will have a chance to look through each other’s detailed profiles to decide whether to see the other party,” Oh said.

In addition, the company conducts a strict registration process to filter out possible ineligibles.

“Whoever wants to take advantage of our matching services should submit copies of their identification and employment verifications and sign a personal information agreement, which holds them legally responsible for the information they provide,” Oh said.

“By doing so, we prevent misinformation and vouch for a participant’s identification, which is not usually guaranteed by individual online dating service providers.”

By extending its services online through the English language, Sunoo said it is confident it can break into the lucrative global market, but the challenge is matching its existing service - essentially an English language version of its current setup - with the varied expectations of international singles who more often than not come from different cultural backgrounds.

“I got the impression that people like to know more about things like one’s financial status and family background in Korea when they look for a date, which we [Westerners] consider not so important,” said Patrick Stewart, a 33-year-old English teacher at a local university.

He’s been in Korea eight years and participated in the recent speed dating event hosted by Sunoo at Blush.

Stewart hinted that expats may not take the trouble to undergo a rather complicated process while they can turn to other channels of much easier access such as online dating sites to meet new people.

Brad Curtin, a 38-year-old actor from Canada, who has also been in Korea eight years, agreed.

“While we usually meet someone first and then see who they are, Koreans are inclined to focus on personal information such as family background, income and occupation about a person whom they will meet,” said Curtin, remarking that the social atmosphere in Korea often requires such information to be shared.

However, some participants indicated positive prospects of the company’s global matchmaking business.

“While you can’t fully trust a person whom you meet in a club or a bar, you can be sure at least that people who sign up for this kind of service are interested in a more serious relationship,” said Amanda Beach, a 24-year-old from Virginia, who has been less than a year in Korea and works as an English teacher.

“Even if you don’t find your match during the process, you can meet various new people and socialize with them while enjoying nice food at a nice place. So why not?”