Stand by your political man

Stand by your political man 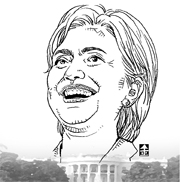 “Sometimes it’s hard to be a woman, giving all your love to just one man. You’ll have bad times and he’ll have good times, doing things that you don’t understand. But if you love him you’ll forgive him. Even though he’s hard to understand. ... Stand by your man.”

Tammy Wynette’s 1968 hit song received both a flood of popularity and notoriety. The lyrics suggesting that a woman should stand loyally beside her man no matter how the wrongdoing of her husband or boyfriend offended feminists of the time.

The song popped up once again in 1992 when Bill Clinton was running for the United States presidency. During the campaign, his wife Hillary appeared on the CBS TV program “60 Minutes” and declared that she was not the type who would just stand by her man, like Wynette. But when her husband later became embroiled in a sex scandal involving a White House intern, she did, in fact, stand by her man.

Since then, for the wives of politicians who were involved in affairs or sex scandals, Hillary’s choice has become an example.

They include Silda Wall Spitzer, the wife of Eliot Spitzer, the former New York governor who resigned over his involvement with a high-priced prostitute, and Susan Craig, the wife of former Senator Larry Craig, who was arrested in an airport restroom by an undercover police officer for lewd behavior - of a homosexual nature, no less.

Instead of filing for divorce, these women stood by their disgraced husbands and continued supporting them. Nonetheless, many find it hard to believe that they forgave their husbands primarily out of love, as the famous song lyrics encouraged.

Eleanor Roosevelt, called in her time “the first lady of the world,” is one of the early examples of such political forgiveness. In 1918 she learned of her husband’s affair with her secretary. Despite the personal agony, she chose to endure it and saved their marriage. Later, thanks to her political influence, she helped her husband get elected governor of New York and later, U.S. president. After her husband died, she threw herself into work for the United Nations and served as the first chairperson of the UN Human Rights Commission.

Veronica Lario, the wife of Italian Prime Minister Silvio Berlusconi, however, is taking the opposite direction. She openly criticized her husband after he attended a birthday party of an 18-year-old model. Two years ago, she ran a letter in a newspaper and asked him to apologize for a similar affair. Now, she says she has had enough and is reportedly seeking a divorce.

Is it because of the cultural differences between the United States and Europe that these wives responded in such different ways? Whatever the reason, the wives of philandering politicians have another example, thanks to Lario.