Gugak brunch is something new at noon

Gugak brunch is something new at noon 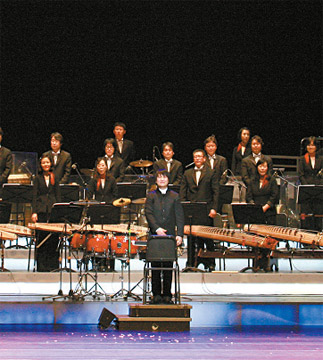 The National Orchestra of Korea’s series of gugak brunch concerts begins today. Provided by the organizer

These days, brunch concerts are a regular offering at major performance halls like the Seoul Arts Center in southern Seoul and the downtown Sejong Center for the Performing Arts. However, most of them are performances of classical music from the West. With this in mind, the National Theater of Korea is holding a series of brunch concerts featuring gugak, or Korean traditional music, starting today.

“We may be late, but we are different [in that we present gugak],” said Oh Ji-won, one of the organizers. “It will be the first-ever gugak brunch concert in Korea.”

The brunch series, titled “Midday Concert,” will be staged by the National Orchestra of Korea throughout the year. The repertoire for the first few concerts will be designed for those unfamiliar with the genre, while the program in the latter half of the year will be created for those who would like to dig deeper, organizers say.

The repertoire for today’s concert includes songs from the soundtracks of hugely successful TV dramas like “Temptation,” “Boys over Flowers” and “Beethoven Virus,” as well as fusion gugak. The opener will be the orchestra’s signature piece, “Arirang Fantasia,” composed in 1976 by North Korean Choi Seong-hwan. The New York Philharmonic played the piece in Pyongyang in February last year.

Hwang Beyong-gi, the orchestra’s artistic director and a master of the gayageum (traditional stringed instrument), will provide commentary for the concert. Next year, the organizers hope to present a brunch concert every month.