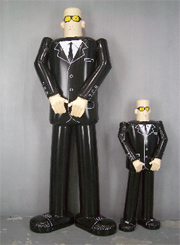 Suitman by Young Kim. Provided by the Seoul Museum of Art

Monsters have invaded Seoul. And they are throwing a party to celebrate their successful occupation of the city. Where? At the Seoul Museum of Art in central Seoul.

Monsters in various incarnations cavort on the grounds of SeMa in “Museum Attack!” The exhibit presents 50 sculptures, installations and video art pieces produced by 12 teams. The artworks are displayed outdoors in front of the SeMA building.

“The exhibit was extremely popular especially on May 5, which was Children’s Day,” remarked Kim Woo-im, the museum’s curator. “But I don’t think children are the only ones having fun here. Students and businesspeople stop by to take pictures or just relax.”

As visitors approach the SeMA building, there is a tank guarding the gallery. Kim & Hyun’s “Banana Milk Tank” is a tough looking military machine inspired by, well, banana milk bottles. Nearby, “Feel the Pandas” features giant toys made by Lee Mi-yeon.

Meanwhile, monsters like “ShamPooh,” Byun Dae-yong’s two-headed Winnie the Pooh, and “Propaganda,” a giant with bones of steel by Lee Ki-il, are some of the other eye-catching pieces on display.

Korean-American Young Kim, who already has quite a few fans worldwide, is also participating in the event with a group of futuristic “Suitmen” characters.