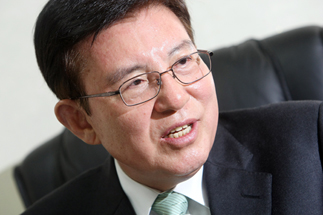 
For more than a decade, an inter-Korean body, the Korean Council for Reconciliation and Cooperation, has been the country’s leading civic organization working to strengthen inter-Korean relations. Even when North Korea refused to talk to the current administration, the council has kept the door open by continuing with its exchanges and humanitarian assistance.

The KCRC was founded in September 1998, in the first year of the Kim Dae-jung administration, to aid inter-Korean reconciliation and cooperation at the nongovernmental level.

Since then, the council has organized many inter-Korean activities including an open forum on national unification at Mount Kumgang in 2001 and North-South joint unification festivals and celebrations held in Pyongyang, Incheon and Seoul in successive years.

The range of its activities goes beyond providing humanitarian aid to organizing joint meetings between political parties and religious and civic organizations; giving awards for work toward reconciliation; cultural events, and an agricultural assistance project. The group consists of some 170 civic organizations, political parties and economic groups including the Federation of Korean Industries and Federation of Korean Trade Unions.

This year alone, the group, along with another civic organization, “Green One Korea,” visited North Korea three times and met with Kim Yong-dae, the chairman of the North Korean Red Cross, to discuss reforestation in the country.

Kim Deog-ryong, a veteran politician and former GNP lawmaker, was named chairman of the KCRC on March 19 this year.

“Within the KCRC, there was a need for a powerful head to be a link to the present administration,” said an official at the council.

In an interview with the JoongAng Ilbo on Monday, Kim said, “Reconciliation between the two Koreas is not a 100-meter sprint but an 80-million-kilometer marathon. It won’t be easy, but the task is something that as a nation we can’t give up on.”

Q. There is talk that the KCRC’s progressive stance during past administrations will change.

A. The KCRC’s basic aim will not change. Our effort to foster national consensus on unification and promote exchanges between the North and the South will continue.

At present, inter-Korean relations are very difficult. There is no knowing what will happen next. In this situation, there is a lot the KCRC must do including initiating conversation between the North and South when communication is increasingly rare. This time, however, we plan to take our time in sorting out what the problems are, instead of just hurrying to accomplish a goal, as in the past.

Can you give an evaluation of the Sunshine Policy?

There are both negative and positive aspects. It was good to see the North as [a partner] for reconciliation and cooperation with us [South Korea] instead of labeling it a hostile enemy.

Through the policy, inter-Korean relations and trade were able to grow. The number of personal exchanges in 2007 totaled 160,000, compared to 14,000 in 2002. Inter-Korean trade also increased to $1.8 billion in 2007 from $640 million in 2002. Relations between the Koreas are definitely improving. However, this development did not come about because of our unconditional support for the North. There were many limitations to our plan in supporting the North, especially the fact that we couldn’t muster the support of the majority of the public.

What is your view on the North’s stopping communication after urging the implementation of the June 15 and Oct. 4 joint declarations?

The current administration has never refused to implement the joint declarations. Although the June 15 declaration succeeded in creating a big picture - pointing to North Korea as an object for conversation instead of confrontation - it failed to win the agreement of the public. The Oct. 4 declaration also had its limitations: It was difficult for an administration almost at the end of its term to win consensus and implement it.

Personally, I think that even if there are some problems with the declarations, for either side to break the terms of the agreements would not be advisable. At the same time, the North should not forget that they also should stick with the North-South Basic Agreement of 1992, their denuclearization agreement and the July 4 [1972] North-South Joint Communique.

What do you see for the future of humanitarian aid to the North?

At present, the situation is difficult with the North shooting rockets and talking of a second nuclear test. However, aid to the North can’t be brushed off, either. We help people in Africa; how can we ignore our starving compatriots in the North? If our government can’t handle supporting the North with rice, medicines and fertilizer by itself, it needs to ask the private sector or the international community.

How about the continuing tension between the Koreas, including in the Kaesong Industrial Complex?

The Kaesong Industrial Complex should be viewed in a separate light from political and defense issues. Kaesong is the platform for the two Koreas to develop and experiment economically. If the North keeps up their hostile attitude in Kaesong, what foreign investor will want to enter the complex? Kaesong can be a gateway for peace and prosperity in the Korean Peninsula. North Korea’s leader Kim Jong-il should have a flexible, open attitude toward Kaesong.

What is your aim for the KCRC’s forum on reconciliation and co-prosperity for the Koreas this week?

Our [South Korean] society has always been divided into progressive and conservative in discussing our situation with the North. But for our society to develop, we need to respect each other and narrow our differences and be mature. This forum will gather experts from the education, political and civic sectors and try to arrive at a consensus.

What will you say to a North Korean official if you meet one in the future?

I would stress that all across the globe, countries are competing vigorously for a secure economy. If the Koreas keep dragging each other down, the Korean Peninsula could easily deteriorate. We need to find a way to coexist.

How do you see your roles serving as the chairman of the KCRC as well as being the president’s adviser?

There are similarities - in helping to foster national consensus for inter-Korean policies [as chairman of KCRC] and helping minimize conflict as the president’s adviser. They are both about helping the two sides come together.