Hanks is called back to read the signs

Hanks is called back to read the signs 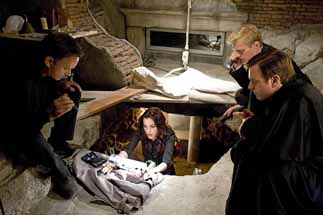 Back in 2006, “The Da Vinci Code” was one bloated movie. Big stars, a big budget, a big following and Tom Hanks’ big hair created one overly long, dense movie that fell short of audiences’ big expectations.

But as most of the gang reassembled for “Angels & Demons,” out this week in Seoul theaters, they toned things down a bit.

Hanks reprises his role as Dr. Robert Langdon, symbologist and religious skeptic, and this time, he’s given enough room to truly claim his role. Opposite Sir Ian McKellen, Audrey Tautou and even a ghastly pale Paul Bettany, Hanks had to compete for the spotlight in nearly every frame of The Da Vinci Code. But in Angels & Demons, he’s without a doubt the biggest star, with really only Ewan McGregor rivaling him in name recognition.

Thus, Hanks owns this movie. Flown in from Harvard to the Vatican to work his decoding magic, he’s charged with the mission of saving the Holy See and four of its kidnapped cardinals from destruction at the hands of the mysterious Illuminati, an “enlightened” sect of learned people fighting back after years of persecution by the Catholic church.

And oh, the bravado is out in full force from the beginning. “Fellas, you called me,” he says with a raised eyebrow when initially denied access to the Vatican’s precious archives.

But despite the cocky bastard act, Hanks’ Dr. Langdon does have a point: He’s an expert, and he, with the assistance of brainy babe physicist Vittoria Vetra, is their only chance at overcoming the Illuminati. The attack also coincides with the death of the pope, which means the cardinals must assemble to elect a successor.

As in The Da Vinci Code, time is of the essence. Angels & Demons is set in a single day, and each hour after 8 p.m. brings the grisly death of one of the kidnapped cardinals. Cue the eerie Catholic imagery - melting angel faces and crucifixion poses and all. Even so, the film fails to create a sense of urgency. For heaven’s sake, the Illuminati has a stolen explosive in its hands that could wipe out the Holy See, and all the while a bunch of old cardinals just mumble and grumble? Please.

Although publication of Angels & Demons, the novel, preceded that of The Da Vinci Code, the latter is the one that truly blew up and became a movie first. But since everyone had read the book, the film was robbed of any element of surprise.

Angels & Demons, while wildly popular in novel form, has hit theaters a few years after author Dan Brown’s heyday. Hopefully, audiences will have either a) not bothered reading the prequel to The Da Vinci Code or b) don’t remember every last detail of the plot, meaning this film becomes a bit more entertaining.

Director Ron Howard also switches things up by adding a dash of drama with music, enlisting the help of virtuoso violinist Joshua Bell.

Then there’s Ewan McGregor, who despite being no Tom Hanks, manages to ramp up the action as a camerlengo, an official who stands as pope until a new one is elected. Against all of Langdon’s stoicism, there’s a tension behind McGregor’s religious fervor that treads between devotion and creepiness. And at least he keeps things interesting.