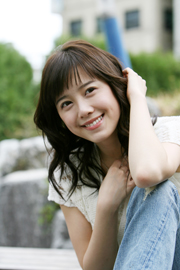 She is among 35 Korean filmmakers chosen to screen short films at the festival in Bucheon, Gyeonggi.

The actress, who recently starred as Geum Jan-di in KBS-2 TV’s drama “Boys Over Flowers,” does not appear in the film. Instead she was busy behind the scenes, writing, directing, editing and even playing the piano for the film’s soundtrack.

The 14-minute film, “The Cheerful Helper,” follows a week in the life of a young man who goes to church in hopes of salvation.