Nobel laureate lives life as witness to a generation

Nobel laureate lives life as witness to a generation 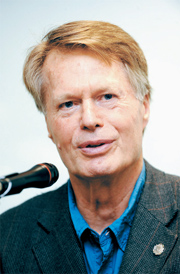 The winner of the 2008 Nobel Prize for literature, Jean-Marie Gustave Le Clezio, says he is not all that different from other writers.

The 69-year-old French author, who has been in Seoul since early this month, is currently working on a short story with the city as a backdrop.

At a press conference Tuesday at the Kyobo Bookstore headquarters, the easygoing author says attention around him increased after he received the award, giving him a platform to speak about his work and his thoughts, but his life had not changed all that much overall.

“I do not think writers lead normal lives. Whatever the topic, they do not do anything but write for a living and do not experience other types of work. The Nobel Prize has allowed me to clear some of my debt, so it’s nice, but I have been living the life of an ordinary writer,” he said, drawing a chuckle from the crowd of reporters in attendance.

Le Clezio taught French language and literature for two semesters at Ewha Womans University in 2007 and 2008, where he has been staying since his arrival in Seoul. An early riser, he wakes up at around 6 a.m. in the dorm he’s been assigned and writes for a few hours before taking an afternoon stroll around the city.

“I have been focusing on my writing at the Ewha dormitory. It’s a quiet and peaceful place, which makes it an adequate place to write. It is quiet in the dormitory in the morning because most students like to sleep in. I like to write for a few hours in the morning and take a stroll,” he said.

Le Clezio, who was not a household name until he won the prestigious award, first visited Korea in 2001. He sees many similarities between Korea and France.

“Both Korea and France are rooted in ancient cultures, and both countries experienced a painful past involving war and colonization. Common struggles create cultural similarities. Whenever I’m in Korea, I don’t feel too far from home,” he explained.

Having read many works of Korean literature, Le Crezio thinks there are several Korean authors deserving of the Nobel prize.

“When I went to Sweden to receive the award last year, I heard many people discussing Korea and Korean literature. And there are many excellent writers just among the works that I have read or heard about,” said Le Crezio.

Le Crezio also has a lot of interest in children’s books, having written a few himself. “Growing up during the postwar period in France, there weren’t any children’s books available, so during my youth I read novels dealing with mature themes.

“Having grown up that way, I now find myself wanting to read children’s books. The wording and motifs in children’s books may lack complexity, but they are not all that different from other novels. There is a need for adults and children to connect through reading,” he said.

Regarding his role as a writer, Le Crezio believes it’s not his job to suggest solutions to the world’s problems, but to raise awareness.

“I have said from time to time that writers are like witnesses to a generation. That means writers merely use plot, characters and situations to express struggles, despair and hope. Writers are supposed to make their readers think by raising questions about various social issues,” he said.

Le Crezio will give a reading on the 10th floor of Kyobo Life Insurance in Gwanghwamun at 4 p.m. on May 22. Those interested in attending can sign up on the Daesan Foundation Web site, http://daesan.or.kr, or at the Kyobo Bookstore site, http://kyobobook.co.kr.