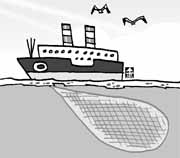 In Alan Weisman’s book, “The World Without Us,” there exists the circular ocean current called the North Pacific Subtropical Gyre in the Pacific between Hawaii and the mainland United States. The trash coming from land and ships spin around in ocean currents that slowly move in a swirling flow.

The large mass of accumulating marine trash is equal to that of a small continent. The garbage is nearly 1,600 kilometers (994 miles) in diameter, and the amount of garbage collected is more than 3 million tons.

More than 6 million tons of marine waste per year is a global issue we must deal with. During the “International Coastal Cleanup Day” event held on Sept. 20, 2008, the waste collected from coasts worldwide was merely 3,175 tons.

The waste from China and Taiwan reaches outward to the western and southern coasts of the Korean Peninsula. Waste generated in Korea can be found on Japanese coasts.

What troubles us most about such waste is lost or abandoned fishing gear, such as nets and traps.

Although discarded, the fishing gear could continue to snare fish, crabs and crawfish. A large group of fish gathering to eat these catches may also get caught in the fishing gear.

“Ghost fishing” is the term used for the damage to seas by lost fishing nets.

The “ghost nets,” also known as “fish tombs” or “land mines of the sea,” also inflict harm on turtles and seabirds. The abandoned fishing nets could also get caught up in ships, causing accidents.

The Food and Agriculture Organization and the United Nations Environment Program released statistics that fishing gear lost or abandoned every year worldwide is not less than 640,000 tons, accounting for 10 percent of total marine litter.

Some 400,000 tons of waste fishing gear remains off the coasts of Korea. The government strives to collect waste by paying some of the clean-up costs on the coasts, but it has made slow progress.

Biodegradable fishing traps or nets have been distributed on a trial basis for a few years. As they don’t need to be collected, they can be left to decay and wash away after two years at sea.

However, it is not a fundamental solution. Until the fishing gear disappears, the ghost nets will continue to catch fish.

Precision in weather forecasting technology will help prevent loss of fishing gear due to storms, and global positioning system attachments to fishing gear can help in tracking precisely where they are lost so they can be picked up.

Of course, biodegradable or GPS-equipped fishing gear is costly. But we should use every means to not endanger fish so we can pass the planet’s fishing resources to our descendants.