Gateway to the Joseon capital

Gateway to the Joseon capital 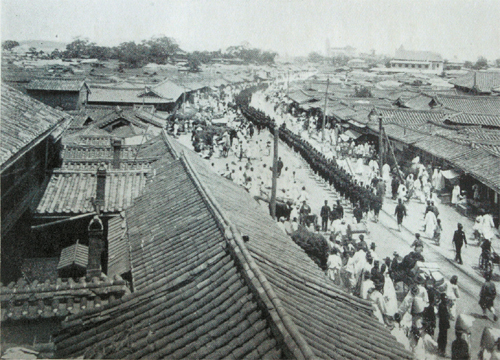 Sungnyemun was the key gateway into the capital. The photo captures the road inside. Provided by Myongji University-LG Yeonam Library

Despite the physical loss of Sungnyemun, Seoul’s South Gate, to arson in February 2008, the spirit of the historic gate lives on in popular imagination and language.

For example, it lends its name to a recreational folk game as well as a song that comes with it, called “Namdaemun Game,” and it’s slang for a man’s fly - because it’s in the south.

Sungnyemun, popularly known as Namdaemun, was one of the four major gates to the capital during the Joseon Dynasty (1392-1910). Namdaemun translates as “great southern gate.”

Historians say the leaders of Joseon named the four large gates of the capital after four virtues:

These virtues make the loss of Sungnyemun even harder to take. After all, Korea takes pride in the fact that its neighbors referred to it as “the country of courteous people in the East.”

And it’s not just the embodiment of courtesy that gave Sungnyemun unsurpassed significance.

“[Sungnyemun] is the most important gate among the eight gates [four big gates and four small gates] of the capital. Located south of the main palace, Gyeongbok Palace, it was the main gateway to the capital,” wrote Won Yeong-hwan, an emeritus history professor at Kangwon University in “600- year History of Seoul,” a nine-volume account of the capital’s history.

Historians at the City History Compilation Committee worked from 1977 to 1996 collecting historical data and the book contains the results of their research.

The top photo, which was published in the book “Chilgoopie the Glad: A Story of Korea and Her Children,” written by Jean Perry in 1906, offers a wide view of the road right inside Sungnyemun.

A British missionary, Perry authored several books based on her work in Korea.

“One of the interesting elements in this photo is the lines of soldiers entering the capital,” pointed out Ahn Chang-mo, a professor of architecture at Kyonggi University.

According to Ahn, a keen student of architectural history and a collector of old photos, the soldiers appear to be Japanese. 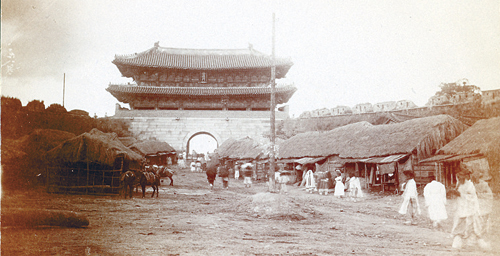 Outside Sungnyemun one can see a more modest scene.

The Russo-Japanese War (1904-1905) was fought in Manchuria and the waters around Korea over their imperial designs in Northeast Asia.

The grounds for this reading of the photo, Ahn says, are the two distinctive buildings in the background: Myeongdong Cathedral, built in 1898 and the predecessor of Seung Dong Church, built in 1893 and designated Intangible Cultural Property No. 130 by the Seoul Metropolitan Government.

These clues indicate that the photo was taken sometime after 1898.

There are several photos of this road taken from this exact same angle, which experts assume to be the gate tower. Some don’t have the two buildings. Some have partial silhouettes of them, indicating that construction was under way, factoring as some kind of dateline.

“The view of Myeongdong Cathedral is an indication that the photo was taken sometime around the war, explaining the presence of Japanese soldiers” said Ahn.

This photo, in fact, captures a crucial moment in Korean history as this conflict between Russia and Japan became the catalyst for Japan’s colonization of Korea.

“For Japan’s part, the war was a chance to heighten the possibility of annexing Korea.

Top: Sungnyemun, after it burned down in February 2008. Middle: Underway reconstruction of the gate, scheduled for completion by 2012. Above: A computer-generated image shows Cultural Heritage Administration officials’ plans to restore the city wall. [JoongAng Ilbo]

“Japan intentionally made its soldiers pass through the Korean Peninsula, showing its military muscle,” writes Sin Dong-jun in his 2007 book, “Joseon’s Kings and Followers: Seeking a Wealthy Country and a Powerful Army.”

Seoul, surrounded as it was by fortified city walls, was an unavoidable gateway even for unwelcome guests.


Outside, quite a different scene

The three major marketplaces during Joseon were located near Jongno, Dongdaemun and just outside Sungnyemun.

The marketplace outside the southern gate was called Chilpae, named after patrol offices of the time with jurisdiction over the area.

“It’s unknown exactly when the Chilpae market was set up. It’s assumed to be in the late 17th century,” said Park Eun-suk of the City History Compilation Committee. “Chilpae market was the most famous for fish dealers,” she added.

In this photo of the road outside Sungnyemun, straw-covered buildings believed to be shops line both sides of the road.

The photo is from a postcard kept at Musee Guimet in Paris, France, according to Myongji University-LG Yeonam Library, which was able to acquire the postcard from the museum.

The museum has in fact a notable collection of artifacts from Korea. It was where Hong Jong-wu, Korea’s first overseas student, is known to have worked from 1892 to 1894.

In this photo, the city wall stretches from the sides of Sungnyemun, indicating that it was taken before 1907, the year authorities began to tear down the city walls.

Previously, Japan was held responsible for taking down the city walls, a move thought to have been its way of demonstrating its authority. But this theory may not be right.

“Taking down the city wall was probably inevitable. In fact, such cases can be found in the histories of other countries as populations grow and cities modernize, too,” said Ahn of Kyonggi University.

A perusal of the Annals of the Chosun Dynasty turns up evidence that the removal of the city walls had in fact been due to increased traffic and accidents.

“[In Namdaemun] there is a disorderly congestion of people, carts and horses. Now there is also a street car going through, so it’s hard to avoid [collisions] and accidents. So inevitably, we sought ways to make the traffic system more efficient,” reported Gwon Jung-hyeon, an official serving King Gojong (1852-1919), on March 30, 1907.