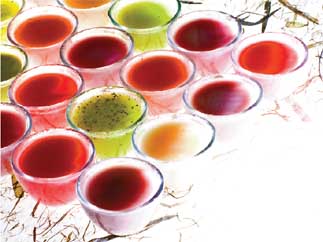 You don’t have to spend too long in Korea before you encounter soju, a popular Korean liquor traditionally made from rice that goes well with meat dishes such as samgyeopsal, grilled pork belly rashers.

And if you spend a little longer here you will eventually come across another popular alcoholic drink, makgeolli, also known as takju, which goes very well with pajeon, a kind of pancake made with flour, eggs, green onion and sometimes kimchi or even seafood.

Soju has maintained its position as a grassroots beverage, but makgeolli, also a rice-based drink, lost ground to the spread of Western drinks such as beer, whiskey and wine in the 1970s. This was a period marked by modernization and makgeolli became more of a speciality drink.

However, makgeolli is back in the spotlight following reports from rice wine makers that sales of the brew are on the rise.

The Seoul Rice Wine Manufacturing Association, which owns six breweries within the city of Seoul, said that the daily output of makgeolli from each of its breweries almost doubled from 30,000-40,000 bottles two years ago to 60,000-70,000 bottles this year.

The association, the Seoul and Gyeonggi makgeolli market leader with a market share of over 80 percent, said it sells just about all its daily produce. 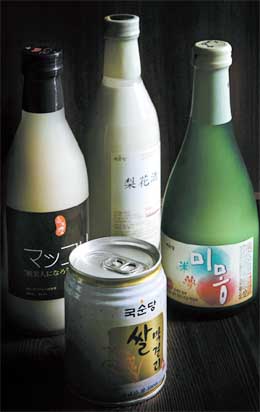 Kook Soon Dang, the country’s leading traditional wine maker but a latecomer in the domestic makgeolli market, has also seen a significant increase in sales of its makgeolli products.

April sales were 220,000 bottles, more than double that of the previous month (100,000 bottles) and quadruple the total sales for the first half of last year.

“Makgeolli’s rising popularity can be attributed partly to the recent economic downturn, which came to the fore particularly last year. Consumers tend to turn to makgeolli when they are feeling the economic pinch since the drink is relatively cheap,” said Shin Woo-chang, deputy director of the research institute of Kook Soon Dang Brewery.

Another reason for the drink’s resurgence is it’s not too strong and it’s not bad for you unless consumed in large quantities.

“Makgeolli is low proof with an alcohol content of 6-7 percent so that people with a lower tolerance can also enjoy it,” said Sung Ki-wook, director of the research institute of the Seoul Rice Wine Manufacturing Association.

“The fermented rice wine has also proved to be good for health as it contains lots of lactobacilli and fiber, matching the current ‘well-being’ trend in our society,” Shin said.

Lactobacilli are associated with helping to keep the intestinal tract healthy.

The fermented rice wine has also been found to be effective in suppressing cancer and preventing high blood pressure, according to a report released last year by a research team at the department of food and nutrition at Silla University in Busan.

Furthermore, makgeolli’s attempts to move with the times should also be factored in to the revival equation. So-called cocktail makgeolli drinks are aimed at younger drinkers. They contain different kinds of fruit and come in a range of colors whereas straight makgeolli is universally a milky-white liquid.

“It’s just like drinking a fruit juice, not alcohol at all. What I like the most about this new type of makgeolli is that I don’t have a hangover the next morning.” Dduktak sells makgeolli cocktails using various fruits such as strawberry, kiwi and pineapple.

“Makgeolli makers’ efforts to popularize the Korean wine by packaging it in a can or a fancy bottle as well as converting it to a new version like cocktail makgeolli have succeeded in winning the hearts of young and new customers,” claims Shin. 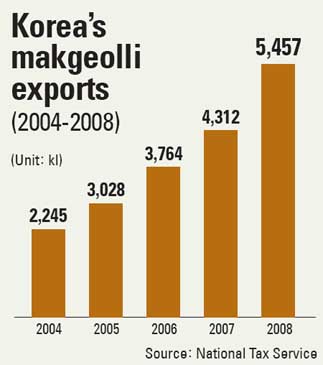 “And the advancement in the quality and taste of makgeolli in recent years with the use of better ingredients such as quality rice has apparently contributed to recapturing the older people who often feel nostalgic for makgeolli, a drink that reminds them of their youth.”

One of the reasons makgeolli got the cold shoulder after its heyday in the 1960s originates in fears over food shortages. In 1965, the government banned the use of rice for making makgeolli because there were worries that the country was not producing enough food for its growing population.

The government forced makgeolli makers to use other grains instead of rice, a move that affected the original taste of the drink, which proved unpopular with some drinkers who couldn’t adjust to the new flavor.

Makgeolli’s newfound popularity reaches beyond Korea’s borders. Drinkers can sample a range of rice wines indigenous to Korea at bars in downtown Tokyo areas such as Shinjuku, Ginza and Shibuya.

“We sold 3.4 billion won [$2.74 million] of makgeolli in Japan last year and sales of the liquor have grown 20 to 25 percent annually over the recent years,” said Lee Jin-seong, director of E-dong Rice Wine Brewery, the first Korean makgeolli exporter to Japan via its Japanese affiliate established in 1993.