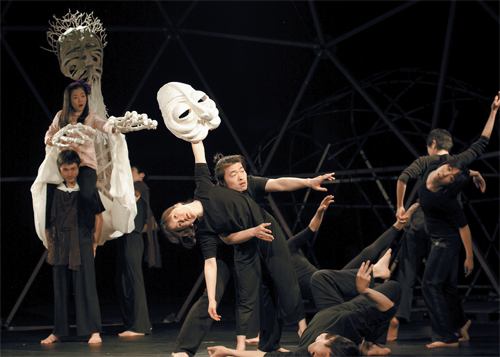 The group Tuida performs “Alice Project.” Provided by the festival

The 2009 Chuncheon International Mime Festival kicks off in Gangwon Province this Sunday. The eight-day fiesta promotes contemporary mime and movement arts and is celebrating its 21st anniversary this year.

Although the event is marketed as centering around mime, it isn’t just about the silent acts. Physical theater, movement theater and visual theater are also part of the fun, along with site-specific theater performances and installation art exhibitions.

About 100 companies from Korea will participate in this year’s festival, along with 12 from Russia, France, Australia, Macao, Hong Kong and Japan.

First up is the festival’s opening ceremony, “Ah! Soolajang [Chaos],” a four-hour event with a variety of street performances taking place at Brown 5th Avenue in front of M department store in downtown Chuncheon. There will be face painting, mask making and plenty of other family-friendly activities.

At a program called “Friday Night Madness,” the fourth wall comes down as festivalgoers mingle with artists at an all-night multimedia and experimental theater performance at Anbo Hoegwan in Samcheon-dong. It starts at 10 p.m. on May 29 and runs through to 5 a.m. the following day.

A performance for the whole family, “Cookie Cutter and Friends,” by the Australian group Men of Steel features three crazy but lovable chefs fighting against exploding popcorn and other feisty foods. The show received the Festival Directors’ Award at the Melbourne International Comedy Festival in 2006.

Collaborative works are another feature of this year’s festival. “Blik” is a collaboration between Korea’s Homo Ludens Company and France’s La Compagnie Monsieur et Madame O.

“Hong Kong and Macao also teamed up with Korean mime companies to produce some interesting shows,” Lee says. “Maids” is a joint production by Korea’s Sadari Movement Lab and the Macao Cultural Centre, while “Why Not,” directed by Korean Yoon Jong-yeon is performed by Fringe Mime and Movement Lab, two groups from Hong Kong.

Those wanting to try their hand at physical theater can participate in a special workshop that will give participants a chance to create and stage their own street theater performance. The “Artists’ Flea Market” will be held for the festival’s duration to keep people entertained between shows.

“We’ve organized many events this year so that the people coming to the festival can get more involved and enjoy their time at Chuncheon,” says Lee.