Tying the knot with herbs, nettles and hanji

Tying the knot with herbs, nettles and hanji 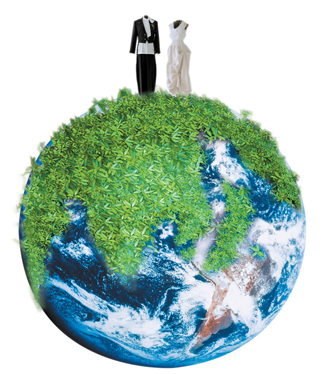 The tuxedo and wedding gown on the globe are made by Korean designer Lee Kyoung-jae using cornstarch.

A snow-white wedding gown adorned with a string of beads, pearls and crystal sequins is a dream for almost every bride, but for 30-year-old bride Seonwoo Young, such a gown means something different.

Seonwoo is well aware of how much bleach is needed to make a bridal gown as white as milk. She also knows it takes hundreds of years for a wedding gown made with polyester to break down in a landfill.

With these thoughts in mind, Seonwoo chose an ivory-colored dress made with hanji, or Korean traditional mulberry paper. The dress, which is, of course, washable, was designed and made by eco designer Lee Kyoung-jae. After her May 9 wedding, Seonwoo’s wedding gown will be altered into an everyday dress by Lee.

Another green move was for Seonwoo and her fiance Kim Nam-hong to send wedding reception leftovers to a food bank and donate money to offset carbon dioxide emitted from their wedding through the Love Green campaign.

The campaign encourages couples to fund tree planting at the World Peace Forest in Yeongjong Island, Incheon. The campaign is organized by the civic group Forest for Life, where Seonwoo is a team manager in the City Forest Department.

Weddings and carbon dioxide emissions might seem quite the unlikely pair, but according to Forest for Life, a single wedding emits nearly 4,000 kilograms (8,818 pounds) of carbon dioxide.

In comparison, the average Korean produces 9,860 kilograms of carbon dioxide per year, according to the latest figures from the Korea Energy Management Corporation. 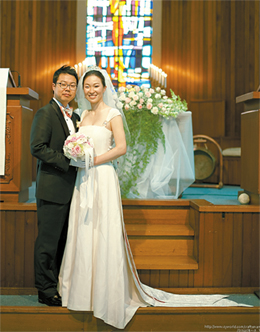 Seonwoo Young (right) in a wedding dress made from hanji, traditional Korean mulberry paper, poses with her husband Kim Nam-hong at their green wedding on May 9 at a church in central Seoul. By Kim Tae-kyoung

“Hundreds of visitors drive their cars to a wedding and honeymooners usually fly off someplace. And many things are discarded after a wedding such as flowers and disposable goods,” said Choi Seung-hee, an activist from Forest for Life.

“But people are realizing the importance of this campaign after the central government started to promote the low-carbon, green growth plan,” Choi added.

Indeed, green is the most talked-about word these days. Ever since the Lee Myung-bak administration prioritized its low-carbon, green growth plan, the government is involved in diverse projects such as promoting the bicycle industry by shelling out 10 billion won ($8 million), the Ministry of Knowledge Economy said earlier this month.

However, going green is not all about promoting the local bicycle industry or developing hybrid cars.

Everyday lives are closely related to the low-carbon, green growth policy, and Seonwoo keeps this in mind. People can start from simple things such as offering plastic bags at a wedding reception so that guests can doggy bag leftovers or purchasing secondhand household goods for a new home.

“I’ve been telling people to think about the environmental impact [of our activity on the Earth as an activist,] but I realized that I’m putting nothing into action, so I thought I have to prove that going green is not that difficult in our everyday lives,” Seonwoo said, who is not alone in this green wedding movement.

Top: Herbs are used for the bridal bouquet. Middle: Potted flowering herbs decorate Soma Museum in Bangi-dong, eastern Seoul, for a wedding. Above:An eco-friendly wedding invitation that can be reused as a picture frame. By Lee Kyoung-jae

According to industry officials, an increasing number of people - even though still just a handful - are turning their eyes to a green wedding, a unique trend in a nation where a wedding means more than a simple ceremony.

“Despite fewer marriages in Korea, wedding ceremonies will remain a big deal and wedding-related companies keep coming up with a variety of unnecessary expenses to make couples spend more,” said Rando Kim, a professor of consumer sciences at Seoul National University.

“Since a wedding is a one-time event and a gathering of families, people want to save face,” Kim added.

Unnecessary amenities such as limousine service for the married couple from the wedding venue to the airport, or decorating the venue with imported flowers mean more carbon dioxide emissions. Given these facts, people who try to minimize their wedding’s impact on the Earth are a new breed.

“In the past, most enquiries came from relevant industry officials such as activists, but I get more calls from ordinary people these days,” said designer Lee, who makes wedding gowns and tuxedos using eco-friendly materials such as cornstarch, nettles and hanji.

Lee is the first Korean eco-designer to make wedding gowns with environmentally friendly materials, which are all washable like other clothing.

As a designer interested in environmental issues, Lee wanted to offer brides a new option rather than expensive imported silk dresses or rental wedding gowns made of polyester.

“People think there’s nothing wrong with rental wedding gowns, but they are discarded after they are rented four or five times. They can’t be used more than that because the dresses are adjusted with pins and needles every time they are rented out,” Lee said.

“The thing is, it takes hundreds of years for a polyester dress to decay, and if the dress is burned, it gives off toxic chemicals.”

Lee made 10 green gowns from 2006 to last year, and she has made three this month, including Seonwoo’s. However, throwing a green wedding does not necessarily require an eco-friendly wedding gown. Kil Hong-duck, 34, had a green wedding last July.

“I tried to save as many trees as possible by sending wedding invitations by e-mail and text message,” said Kil.

Kil’s fiance held a cactus instead of a bunch of flowers and the couple wore ordinary formal clothes. They gave plants as gifts to guests who used public transportation to get to the wedding and they handed out plastic bags and aluminum foil so people could take home leftovers. 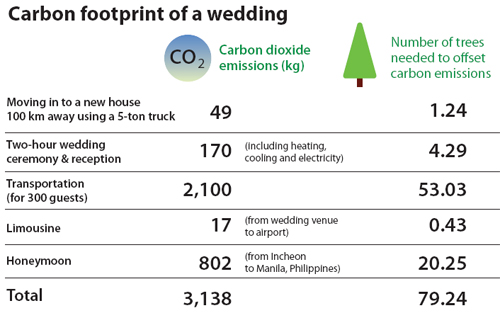 Lee Saem, 30, also chose a different wedding last year. Instead of decorating the venue with flowers, which can cost up to 3 million won, she used flowering herbs, which she then gave out as party favors.

She also made sure her wedding invitation cards were made from recycled paper and soy oil ink.

The invitation card was designed to be reused as a picture fame. She also held a herb bouquet, not the traditional flower bouquet that needs constant warmth in a greenhouse.

Kim Hee-jeong, an activist working for Green Korea United who tied the knot in February, went one step further and made her own wedding dress.

Not only individuals but entire companies have started to care about a wedding’s impact. Yuhan-Kimberly, the nation’s largest maker of diapers and toilet paper, and ECMD, a catering service provider, are encouraging their employees to join the Love Green campaign.

But it is easy for brides and grooms to host a green wedding in Korea because of cultural resistance and established customs. “I get up to 15 enquiries per month, but more than 10 are from people who find it hard to persuade their parents to go green. In Korea, a wedding seems more like a feast for parents, not for couples,” Lee said.

Park, a 30-year-old woman who works for a trading company in Seoul, finds herself in such a position. She recently set a wedding date, and unlike cookie-cutter ceremonies, she wants her big day to be constructive and eco-friendly.

Park, who did not want her full name printed, wants to hold a green wedding but her parents and in-laws-to-be do not like the idea.

“I don’t want to waste food, so I suggested our parents treat guests to vegetable-based bibimbap [rice mixed with vegetables and seasoning] but they think there should be assorted kinds of meat and other food,” Park said.

“They don’t think it’s a good way to serve guests on such a big day.”