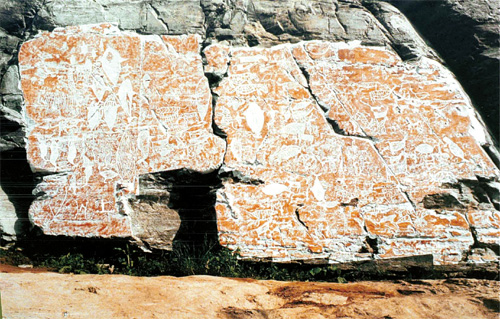 The Bangudae rock carvings, located in Ulsan, are submerged under water for several months every year. [JoongAng Ilbo]

Not everyone was in a festive mood in Ulsan last weekend.

The South Gyeongsang city, noted for its marine tradition, was celebrating its first annual whale festival since the government designated Jangsaengpo a special whale culture zone last summer in recognition of the area’s long association with the sea animals.

Highlights of the four-day event included whale-watching programs, parades and even a whale singing contest - with songs sung by people, not the whales.

But as organizers conducted the Gochon Rite in front of the Bangudae rock engravings, one of the most important prehistoric relics in Korea, to mark the start of the festival on May 14, behind the scenes an ugly controversy showed no sign of abating.

The argument is not an anti-whaling campaign or a protest about the consumption of whale meat caught “accidentally” and sold in Ulsan’s whale restaurants. 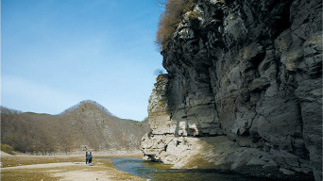 This side view of the rocks shows how the overhang of the cliff offers some protection to the rock carvings.

It’s about the best way to preserve the rock engravings, National Treasure No. 285. And unless the sparring parties come to an agreement soon, the artwork will soon be as endangered as some of the marine life carved into the ancient rocks.

The Bangudae engravings comprise around 200 motifs depicting hunting scenes and animals, including 46 depictions of large whales. One of the motifs appears to show a whaling vessel used to hunt sperm whales and killer whales, and another depicts bones, indicating that whales were a major food source for locals in ancient times.

The rock art has been touted on numerous occasions as a candidate for Korea’s next cultural heritage to make the Unesco World Heritage List. But one complication obstructing inclusion on the list is the matter of preservation.

The engravings, rediscovered in 1971, spend 140 days a year submerged because of local water policies stemming from the construction of Sayeon Dam in the 1960s. 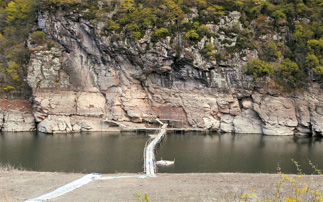 Another panel of the historic carvings. Provided by Ulsan Petroglyph Museum. [Joong-Ang Ilbo]

At the time, no one fully appreciated what treasures the rocks contained, but they do now.

In a survey conducted by Korea Culture and Tourism Institute last month examining the economic value of Korea’s cultural properties, the Bangudae rock engravings topped the list at an estimated 492.6 billion won ($394.5 million).

That’s more than Changdeok Palace in Seoul and the Tripitaka Koreana woodblocks at Hein Temple in South Gyeongsang, both on Unesco’s heritage list.

So what’s the big deal? What makes 270 engravings carved up to 8,000 years ago into walls of sedimentary rock so pricey?

“There are rock engravings containing depictions of whales in other countries, too, but none contain such a vast and detailed depiction of whales as those at Bangudae,” said Lee Sang-mok of the Ulsan Petroglyph Museum at a meeting on preserving the site. “It’s also the only prehistoric rock engraving capturing whale hunting, providing an important clue to prehistoric life.”

For this reason the Bangudae petroglyphs, images created by carving rock, have been the subject of numerous archeology papers at home and abroad, but unless something is done about the damage from water to the relics, there won’t be any rock left to write about. 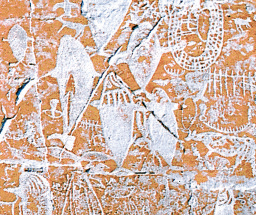 The Ulsan city government earlier this month released a so-called emergency measure for the endangered relic, but conservation groups are not impressed.

Kim Ki-su, the director of the cultural and sports department in a recent press briefing, admits the situation is reaching crisis point. “We’ve decided to set up a natural bank and underwater partition because the condition of the engravings is deteriorating fast,” Kim said. The plan is to set up an underwater divider 30 meters (98.4 feet) around the rock engravings, reclaim land and build an eco-friendly dam.

Local government officials say the plan would cost about 20 billion won and take less than a year to complete.

But other involved parties - the Cultural Heritage Administration that oversees the management of cultural properties and the Ministry of Land, Transport and Maritime Affairs that owns the Sayeon Dam - are skeptical.

“The proposal is no different from the one Ulsan suggested in 2003,” said Kim Cheong-yol of the Cultural Heritage Administration. “It was opposed by experts that brought up the damage the plan would inflict on the environment.”

Meanwhile, the Cultural Heritage Administration and the Ministry of Land, Transport and Maritime Affairs reached an agreement last year on another proposal to resolve the matter - lowering the water level at the dam.

The two offices argue that lowering water levels will inevitably decrease the water supply to urban areas and wouldn’t endanger anyone’s livelihood. And for that, the number of days the rock art is submerged would be reduced to 55 days a year, officials say.

The Ulsan city government has yet to agree on this proposal because of concerns over the decrease in the water supply.

Instead, they suggested last year building a 60 billion won tunnel to change the course of the waterway. The tunnel would take five years to complete.

“Because our proposal for a tunnel takes four to five years to complete, we expect the condition of the engravings to continue,” said officials at Ulsan city government. “Thus, we believe our new emergency measure must be taken to keep the engravings out of the water.”

The biggest problem, experts say, is that none of the proposals put forward by the Ulsan city government, Cultural Heritage Administration or the Ministry of Land, Transport and Maritime Affairs offer Bangudae long-term safety, but others say the real problem is a matter of commitment.

According to Do Jin-young, a cultural assets professor at Gyeongju University, preserving the rocks for good is almost impossible.

“Even rock, thought to have strong durability, weakens when it’s exposed to the elements for a long period of time. Stone is particularly susceptible to the effects of water. In case of Bangudae, the protruding top part of the rock wall protects the engravings from wind and rain, but the dam has done some serious damage.”

Do and other experts say the deterioration of the engravings has taken three forms: exfoliation, cracks and discoloration. In particular, they say exfoliation is evident in 128 drawings when compared to photos from taken in 1971 when the artworks were rediscovered.

But Hwang Pyeong-wu, the chief of Cultural Action and head of the Korea Cultural Heritage Policy Research Institute, says more commitment is needed from Ulsan city. “It’s not like the population of Ulsan doubled in just a year and its demand for water has increased greatly, is it?”

Lee Sang-hae, a professor of architecture at Sungkyunkwan University and director of the Korean office of the International Council on Monuments and Sites (Icomos), argues restoring the natural setting is just as imperative as preserving the rocks.

“The rock engravings aren’t important on their own,” Lee said. “They need to be considered in context, with a full grasp of prehistoric lifestyle, such as the water near the dwellings, fishing practices and rituals.”

Icomos, a global nongovernmental organization, works for the conservation of the world’s historic monuments and sites, and it’s an advisory body to Unesco’s World Heritage Committee.

“Building an artificial dam and reclaiming land, of course, will work against the nomination of Bangudae to Unesco’s World Heritage List. It’s necessary to appreciate not just the engravings but the whole area before proceeding with temporary measures,” Lee said.

Perhaps the last word should go to Kim Ho-seok, a professor of art at Korea National University of Cultural Heritage. “From a long-term perspective, preserving Bangudae will yield so much more in terms of cultural and tourism activities,” Kim said.

But unless agreed-upon action is taken soon, the long-term view will become irrelevant and the endangered artworks extinct.