Scene on the big screen

Scene on the big screen 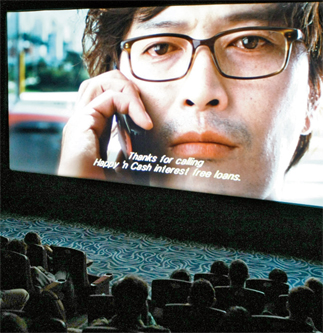 Expats in Seoul watch “Castaway on the Moon,” a recently released Korean movie shown with English subtitles at the Cinus Theater in Gangnam, southern Seoul, on Friday. The Seoul metropolitan government began promoting the English language subtitle service in March in a campaign to make Korean films more accessible to non-Korean speakers. The government is working with local multiplex chain Cinus, which will offer the service throughout the year at theaters in Gangnam and Myeong-dong, central Seoul. Currently, “My Girlfriend Is an Agent” and Castaway on the Moon are screening in Myeong-dong and Gangnam, respectively. Bong Joon-ho’s “Mother” will screen at the end of the month. Provided by Cinus