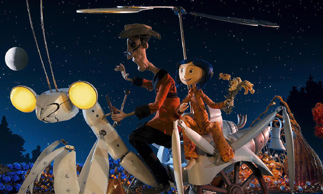 Other Father (John Hodgman) takes Coraline (Dakota Fanning) for a ride on a praying mantis in an alternate fantasy world. [MovieWeb]

Yesterday’s dreary, rainy weather was perfect for cozying up to “Coraline” in a theater - especially on the eve of my yearly vacation back home to the States.

In the film, our kid heroine moves with her workaholic parents to Oregon - a place, as anyone who knows the Pacific Northwest can vouch, seems constantly drenched in showers.

“Don’t forget about me, guys,” says young Coraline Jones (Dakota Fanning) before falling asleep in her new house, to a photograph of her best friends back in her old town, a scene that’s awfully reminiscent of my early days as an expatriate here in Seoul.

A spunky only child, Coraline finds herself left largely to her own devices once transplanted in her new home. Her loneliness is not far removed from that of the average homesick displaced person, made all the worse by her parents’ preoccupation with their work and immunity to her adorable attention-seeking. With her mother’s mantra of “Your dad cooks, I clean and you stay out of the way!” the parental exasperation will likely ring true to anyone who has a child, or remembers being one.

This is perhaps what makes Coraline such a pleasure for young adults. Those with one foot outside kid realm and another not quite into adult territory can appreciate both the plight of parent and child. Teri Hatcher captures the essence of Coraline’s beleaguered mother especially well to create a character far more realistic than her ditzy Susan Mayer on “Desperate Housewives.” So despite the fact that the film is stop-action animation, it’s really not kids’ stuff.

Directed by Henry Selick, he of “The Nightmare Before Christmas” and “James and the Giant Peach,” the film features fantasy sequences that get frightening for those under four feet in height - as corroborated by two boys in the audience who shared the elevator with me after the movie.

Like “Alice in Wonderland,” Coraline provides an escape for its eponymous heroine from the mundanity of real life. So off she goes to her “otherworld,” except that instead of falling down a rabbit hole, she crawls through an expanding blue chute behind a wallpapered-over door. There, like Alice, she finds a land of wonders concocted by her “Other Mother” (also Hatcher), who looks just like her real mom, only with buttons for eyes. Likewise, be-buttoned “Other Father” (John Hodgman from Apple’s “I’m a PC” ads) shows Coraline a magical garden planted to resemble her own face filled with Wonderland-esque nibbly snapdragons.

At first, Coraline welcomes the switch from her preoccupied real parents to the devoted Other Mother and Other Father. But as sinister Other Mother drops the Mommy Dearest act, she reveals her true colors: Instead of devolving into “off with her head,” for Coraline it becomes “out with her eyes.” Worst of all, the otherworld bleeds into real life as Other Mother kidnaps Coraline’s real parents.

Charmingly rickety stop-action animation makes Coraline’s story brilliant and fanciful, yet her mission stays grounded in real emotion. With the lesson that escape isn’t all it’s cracked up to be, the film reminds audiences to take comfort in home, even when it’s in a new and rainy place.