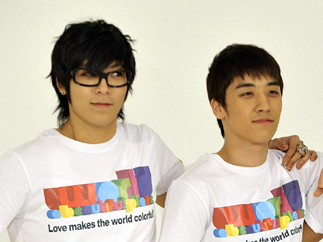 Two members of the boy band Big Bang have been cast in the TV movie “19.”

This isn’t the first time the two Big Bang members have been on screen.

Seungri, the youngest in the group, was the main character in the musical “Sonagi” last year.

He also appeared in “Why Did You Come To My House,” a movie starring Kang Hye-jung released last month.

19, a movie with stories by Japanese writers filmed by Korean directors, talks about three 19-year-olds involved in a murder.

The singers will be playing the young students along with Korean actress Heo Yi-jae.

But acting isn’t the only thing that T.O.P. and Seungri have been working on for this movie.

According to the film’s director, Jang Yong-woo, the two young men have each written songs for the soundtrack as well.

Both of them performed their songs on the stage Wednesday, T.O.P., a rap song, while Seungri, a sad ballad.

The movie will be airing on Korea’s SBS-TV and Japan’s Asahi-TV this September. By Lee Hae-joo