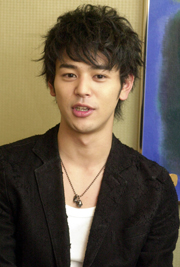 Japanese actor Satoshi Tsumabuki will be coming to Korea tomorrow.

The star of the 2003 hit film “Josee, the Tiger and the Fish,” is stopping by for a two-day visit to promote his new movie “Boat.”

The 29-year-old has not been to the country since his last visit four years ago at the Pusan International Film Festival.

Tsumabuki will join his Korean co-star Ha Jung-woo at press conferences at various locations around Seoul.

The film tells the story of two drug smugglers’ lives and friendships when they are ordered to kidnap a young woman, played by Cha Soo-yeon.

The Japanese actor took Korean language lessons for three months for his part in the movie and will show off some of his newly acquired language skills when he arrives.

Boat will be released next week in Korea.