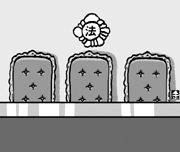 A ruling that would shake the very foundation of the American nation was handed down on March 6, 1857, in Washington. The U.S. Supreme Court did not accept the assertion that blacks were citizens of the United States. Seven out of nine justices supported the proposition, that “the enslaved African race were not intended to be included, and formed no part of the people ...” They also ruled that Congress had no authority to ban slavery from federal territory, reversing a political compromise balancing slave states and free states. This ruling triggered the outbreak of the Civil War four years later.

A century later, another case was brought before the Supreme Court. The disputed point was whether to maintain the policy of racial segregation, under which black students were not allowed to attend school with white students. But nothing seemed to change. The majority of justices including Chief Justice Fred Vinson insisted, “We have no reason to change the policy.”

However, after Vinson died suddenly from a heart attack, his successor, Earl Warren, persuaded his colleagues to unanimously abolish the policy and agree to the landmark decision banning segregation in schools in 1954. From a longer point of view, the inauguration of Barack Obama as the U.S. president 55 years later can be attributed to this powerful ruling.

As shown above, the U.S. Supreme Court justices hold sway over the destiny of the nation. Therefore, a candidate for the court is supposed to undergo a stringent process of hearings examining his philosophy and private life in detail. Once he becomes a Supreme Court justice, an office for life, he is called a “justice,” rather than a “judge,” and gains respect from the people.

Justices call each other “brother” or “sister,” working closely in a concerted effort to protect the Constitution. Although they might become frustrated with each other, as divisions between progressives and conservatives arise in the process of reaching an agreement, they seldom criticize each other in public.

Amid a series of meetings among judges over Justice Shin Young-chul’s controversial and inappropriate intervention in trials, Justice Park Shi-hwan’s comments were met by a wave of protests. He said, “Now, we find ourselves in the fifth judicial crisis.” Although his belief may be of importance, we feel his comments disgraced the status of Supreme Court justices.

The Supreme Court is the last stronghold of a democratic society. We are at a loss as to how to strike a balance and resolve conflicts, as its authority is collapsing due to domestic problems.

It is high time that the members of the judiciary reflect on whether they are cutting off their nose to spite their face.

If you fail to protect your own authority, no one will respect it either.