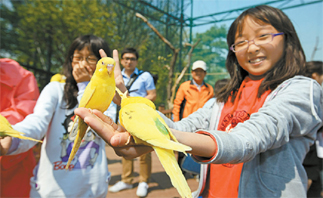 Its zoo is much smaller than Seoul Zoo, formerly known as Seoul Grand Park, in Gwacheon, Gyeonggi, and its amusement park is outdated and less exciting than the rides at Lotte World in southeastern Seoul and Everland in Yongin, Gyeonggi.

But the 36-year-old theme park has its own distinct charm, making it an ideal venue for family outings, especially because it’s located in the heart of the capital.

The zoo is in the center of the park and the animal cages are gathered close together. Compared to other zoos, there are relatively few animals to be seen, but most of the popular ones are here. 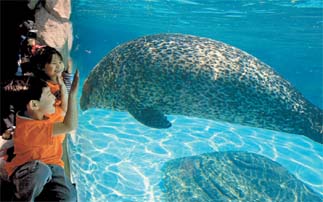 At least you aren’t in any danger of being overwhelmed by sheer variety and stressed out by trying to tell apart different kinds of birds, for example, and remembering their scientific names.

It is also easier to walk through the park because everything is clustered together. There is no need to push a baby stroller up hills for hours or take a bus to see the tigers, lions or bears, which are generally popular with the kids.

Another plus is Children’s Grand Park has recently undergone extensive renovations, unveiling its new look earlier this month.

The sea animal enclosure called Marine Animal House where the seals hang out has been remodeled, new music fountains installed and restaurants, restrooms, shops and information centers were completely renovated.

An outdoor theater that can seat 8,000 people also got a full makeover and a grass football pitch and a large playground called Adventureland Playground have been added.

“New attractions and renewed convenient facilities seem to have revived interest in the park,” Kim said.

In 2006, Children’s Grand Park got rid of its admission charges to boost interest and the number of annual visitors doubled to 12 million but its outmoded facilities continued to inconvenience visitors, staff and, no doubt, the animals.

“Children’s Grand Park was the biggest theme park in Asia when it opened in 1973 but the number of visitors significantly dropped after competitors opened parks in the Seoul metropolitan area in the 1980s,” Kim said.

Visitors welcome the changes. “The facilities have improved a lot,” said Jeon Hee-youn, a teacher from the middle school attached to the College of Education at Hanyang University. “But there is still a lack of convenient facilities like benches or cafeterias.”

A Swedish couple on their first trip to the park said they hadn’t realized admission was free. They learned about the park from a book about Korea. “It is fantastic,” said Camilla, who only gave her first name. “It looks great. This place is very spacious.”

A must-visit place among the renewed facilities or new attractions is Parrot Village. This bird enclosure houses eagles as well as parrots. Visitors can purchase bird feed for 500 won and feed the parrots. You put the food in your outstretched palm and the parrots fly down to eat. While feeding the birds, watch out for droppings. You can’t feed the eagles, though.

The Marine Animal House has polar bears and seals. In the past, visitors could only see animals from the floor above but a transparent wall has been newly built on the ground floor from where you can watch the animals swim.

The Auto Kids Park is a new attraction, too, located on the left of the front gate. Run by the Korean Association for Safety Communities, it’s designed to teach children about transportation safety rules such as walking on a crosswalk and driving.

The place has pedestrian crossings and roads where children aged 4 to 8 can drive electric toy cars. After some instruction, the children get a mock driver’s license. But note that this facility is closed on Sundays and Mondays. For more information, call (02) 455-7119 or visit www.kidsautopark.org.

Among existing attractions, the Animal Show Theater puts on a show every day. The story of the show is based on “Cinderella” but with a twist. Monkeys, parrots, ducks and seals perform various tricks.

An English language translation is not available but watching the animals is fun enough. For more information, call (02) 456-1911.

Other popular animal enclosures are Aquatic Birds, the home of penguins and other water birds; World’s Ferocious Animals, which houses lions, leopards and elephants; and Primates, which houses monkeys.

Near the rear gate, an amusement park offers a number of rides but the facilities are old-fashioned.