The park’s fountain has been upgraded to a music fountain. Provided by Children’s Grand Park

The site where Children’s Grand Park now stands used to be the tomb of Queen Sunyeong, the wife of Sunjong, the last king of the Joseon Dynasty.

When the king passed away in 1926, the tomb was moved to Namyangju, Gyeonggi. A golf course was built in its place.

When the theme park opened on May 5, 1973, the 51st Children’s Day, it was the largest of its kind in the country.It remained that way until Everland opened in Yongin, Gyeonggi, in 1976. The construction of the theme park was initiated by the president at the time, the late Park Chung Hee. In December 1970, Park ordered that a children’s park replace the golf course.

According to a book titled “The Story of Seoul’s Urban Planning” by Sohn Jung-mok, Park had great interest in children’s welfare. 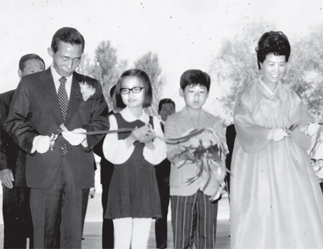 Although he was later known as military dictator, he graduated from a teachers’ college in Daegu, now part of Kyungpook National University, and taught at a primary school.

Park made an official statement on May 5 every year while he was in office. Park and his wife the late First Lady Yuk Young-su arrived at the park for the opening at 10 a.m. on May 5, 1973, and cut the ribbon.

Although the public opening of the park was scheduled for 2 p.m., tens of thousands of people lined up at the front gates. The park opened at noon, earlier than scheduled.

By 3 p.m. the same day, 600,000 people had entered the park. Ironically, despite 120 guards, 110 policemen and 300 boy and girl scouts employed to guide the floods of visitors, 301 children were reported missing.