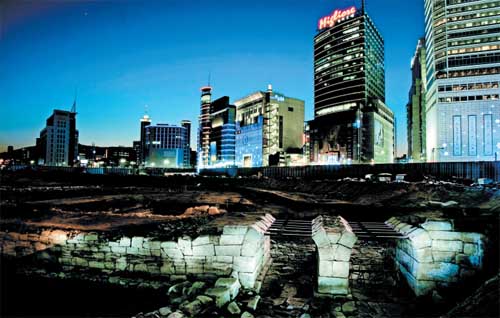 When workers began to tear down Dongdaemun Stadium in September last year, little did they know what treasures awaited them beneath the soil.

In line with its repeated emphasis on city design, the Seoul city government announced in October 2006 it would tear down near-defunct Dongdaemun Stadium and build design facilities.

The architect Zaha Hadid was invited to plan Dongdaemun Design Plaza and Park, which will be built on the former site of the stadium in north-central Seoul.

However, workmen uncovered important cultural relics during the initial stages of the dig. Archeologists at Jungwon Cultural Properties Institute said the finds include parts of the city wall; Igansumun, a gate which controlled the water flow from Mount Namsan to Cheonggye Stream; and the former site of a Joseon Dynasty (1392?1910) military training facility.

In response, Seoul city government has announced it will change the plans for the new design park to accommodate the area’s history.

According to the new plan, the city wall will be restored, and the city government will work with the Cultural Heritage Administration to find ways to touch up other historic properties.

Skeptics doubt that much harmony will be found between Dongdaemun Design Plaza and Park and what the historic finds will create, but supporters anticipate some sort of synergy.

Seoul Mayor Oh Se-hoon said at a ground-breaking ceremony for the park last month he expects “an organic storytelling from the juxtaposition of the ultramodern building and the relics from 600 years ago.”

Cheon Eui-yeong, a professor of architecture of Kyonggi University, says it’s only natural that people feel some resistance to change. “Building a new structure itself is in a way a destructive act,” he says. “But that’s what a metropolis is about: constant clashes, contradictions and conflicts.

“How did the people of Seoul feel when the authorities set up the walls and gates 600 years ago?”

Dongdaemun Design Plaza and Park is expected to be completed in 2011.