To live on in a virtual world

To live on in a virtual world 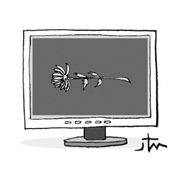 Neal Stephenson first coined the word “avatar” in his 1992 science fiction novel “Snow Crash,” which envisioned a futuristic digital world called the Metaverse. To enter cyberspace, one had to transform oneself into an avatar, one’s digital reincarnation.

The word originates from the Sanskrit avataara which literally means “descent from a higher spiritual realm to a lower realm of existence.”

Today, avatars are characters living in the online virtual world.

The book inspired avid American computer game player and young entrepreneur Philip Rosedale. He always wanted to create a new world within his computer, and the idea of the Metaverse was the inspiration he needed to embark on a quest to create his dream world.

In 2000, Rosedale realized his dream in the form of Second Life, a boundless Web-based virtual realm allowing online characters to fulfill and pursue existence without real-life pressures, restrictions and prejudices.

More than 13 million users now lead second lives in a world they could never enjoy in the real world.

Korea’s online population is relatively less interested in virtual worlds and instead takes refuge in online multiplayer role-playing games like “Lineage” and “World of Warcraft.”

All virtual realms in one way or another mirror and mimic the real world, the “first life.” Therefore, not a day goes by without the heartaches brought about by the common tensions of love, hate and betrayal and human life’s greater calamities like war, dictatorship and terrorism. A courageous and dauntless warrior online may be a person with serious disabilities in reality.

Sometimes, the two worlds ?? real and virtual ?? clash in an unexpected and poignant way. In April 2007, a woman in her 20s who went by the virtual identity of Bi in the game “Lineage 2,” killed herself.

A user who later learned of the tragic news looked her up and found her avatar was still logged on in cyberspace. She was sitting on an island of stones, serenely looking down on the deep blue ocean. For days, millions of characters gathered around the island to pay their respects to her.

Her posthumous form might have been different, if she had been aware of the LegacyLocker service that started in April in the United States to allow frequent online users to leave a kind of online will to transfer digital information and assets to a designated inheritor.

The growth of and dependence on the Web-based world has led to a demand for digital memorialization of the deceased. Anyone can now leave existential imprints and memories eternally on the digital world.

Life and death no longer seem plain and simple matters.