[Viewpoint] A farewell to our president of dreams

[Viewpoint] A farewell to our president of dreams 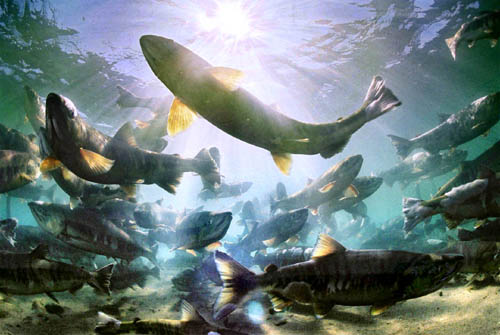 Salmon return to lay eggs in the Namdaechon River in Gangwon Province, where they were born, after a three to four-year journey of thousands of miles through the northern Pacific Ocean near Alaska. [Kangwon Ilbo]

Salmons are born in a river, live in the ocean and return to the river to complete their life cycle. Salmons lay eggs before dying, and their fry go into the ocean.

Ahn Do-hyun, a poet, said, “The sole reason salmon swim against the current, through waterfalls, even if their skin gets torn and their gills get cracked, is to lay eggs.”

The late President Roh Moo-hyun is a salmon. Bongha village is the place where his body and soul matured. It is this place where he was born, grew up, found love and accomplished his life’s goal of passing the state bar examination.

Even after he moved to the big city, he kept his memories of Bongha like a charm: Jawang Valley where he fed cattle, the hut built by his brother Gun-pyeong for him to study for the state bar examination, the narrow paths that run along riverbanks and rice paddies where he used to walk with Yang-sook, a girl from a neighboring village, well into the night.

Roh used to reminisce: “When I walked in the field, the dew on the stalks of rice used to reflect the moonlight and made the field look as though it was covered with silver beads.”

The young man left the village to become a judge, a lawyer and National Assemblyman.

Later, he even succeeded in conquering the peak of Korean politics: the presidency.

But in the end he returned to Owl Rock in Bongha Village.

He became the first political salmon in the history of Korea.

And now history holds its breath at the news of this salmon’s tragic death.

The late President Roh agonized over life and death for three days, skipping meals. Then, like a salmon dashing itself against a waterfall, he fell from a cliff.

He was not under the influence of alcohol. He leapt into the air and the fall broke his skull and spine.

Anyone who has ever thought of committing suicide may know what a desperate act this is.

What was he trying to say with such a shocking act? What kind of egg was he so determined to lay that it was worth breaking his pelvis and ankles?

In his will, he did not show any sign of resentment or remorse.

Before he committed suicide, he defended himself, saying he “didn’t know” about his family’s involvement in the Park Yeon-cha scandal.

However, he did not say anything like that when he threw himself off the cliff.

Instead, he wrote, “Do not blame anyone.”

People critical of him might think he was not in a situation where he could claim innocence. On the contrary, however, there is the possibility that the late Roh did not know about the wrongdoing, as he said.

Therefore, in dying he could be either seeking refuge or lodging a complaint. The truth is now left to time and God.

The “salmon president” will soon become a fistful of ashes and return to nature.

What kind of eggs did he actually try to lay? He may be the only person who knows the right answer.

Regardless of the thoughts he might have had, more important matters are now left to the people.

What kind of a world is “the world where people live?”

I believe it is a world where everyone stands in their own place, a world where each person proudly keeps his or her own pride, and a community where, as written in Roh’s will, “parts of nature” fit together as in a puzzle;

A world where the Korea-U.S. alliance, the rich and ordinary people each stand up straight in their own position.

The secret to a world where people live is balance.

Therefore, we should not worship nor slander the late President Roh. We should not malign his passion or the genuineness of his intentions, nor should we gloss over his immaturity or his wrongdoings.

President Roh was fond of the song “Empty Void” sung by pop singer Cho Yong-pil when he was alive.

Jeong Pung-song, who wrote the song, said, “The song ‘Empty Void’ is a song to console the people for their unrealized dreams.”

Cho sings of “a sad old story that has to be buried in an empty void.”

The dream of the salmon president was a world where people could live.

Many leaders have dreamed the same dream in the history of the human race.

Dreams are free, but making dreams into reality comes with hardship. As the Korean people mourn, we should examine what the late President Roh’s successes and failures were.

I hope the sad salmon, our former President Roh, will find peace in the ocean of the other world.